Wall Street Journal: European Union leaders on Thursday authorized a significant widening of the 27-nation bloc’s sanctions against Iran because of concerns over Tehran’s nuclear-weapons program, in a move that will likely reinforce a slow but steady trend toward weakening economic relations between Europe and Iran.

By STEPHEN FIDLER And LAURA STEVENS 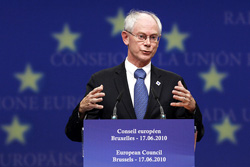 BRUSSELS—European Union leaders on Thursday authorized a significant widening of the 27-nation bloc’s sanctions against Iran because of concerns over Tehran’s nuclear-weapons program, in a move that will likely reinforce a slow but steady trend toward weakening economic relations between Europe and Iran.

The new European measures aim explicitly for the first time at parts of the economy unconnected to Tehran’s nuclear program and go well beyond curbs agreed in a more narrowly focused United Nations sanctions resolution this month. Pressure from the U.S., a much more important market than Iran, has already persuaded a growing band of big firms to curb business ties with the country.

Secretary of State Hillary Clinton said Thursday that she welcomed the European measures, as well as an announcement by Australia that it planned more steps against Iranian banks and the Islamic Republic of Iran Shipping Line.

The EU leaders decided the measures, to be settled in detail next month, would target Iran’s oil and gas industry.

They would impose a freeze on additional Iranian banks and target IRISL and air cargo. Like new measures that have been announced by the U.S., they would include new visa bans and asset freezes on individuals, especially on members of the elite Islamic Revolutionary Guard Corps.

The measures, which brought threats of retaliation from Iran, will most affect Germany and Italy, traditionally Iran’s largest trading partners in Europe as well as the biggest European investors in the Iranian economy. 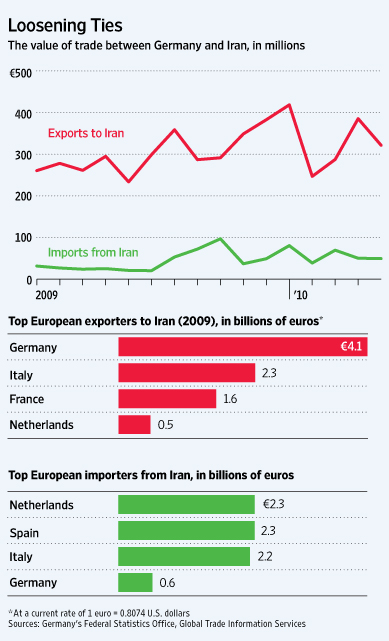 Germany is Iran’s second-largest trade partner, after China. However, because Germany is the second-largest exporter in the world, that is true with many countries. German exports to Iran fell 5% in 2009 and are off 15% from their peak in 2005. Although exports to Iran for the first four months in 2010 increased 13% to €1.24 billion ($1.53 billion) from the year-earlier period, for unexplained reasons, it was still less than the €1.44 billion exported five years ago.

Iranian business is still important for many German firms, said Michael Tockuss, one of the chief executives of the German-Iran Chamber of Commerce based in Hamburg. “We don’t think sanctions, generally, are helpful,” he said, “at least not to achieve political goals.”

Current sanctions don’t affect many German firms right now, he said, because the sanctions focus on, for example, nuclear and military technology that hasn’t been exported to Iran in years.

But the expected EU curbs could hit more firms, Mr. Tockuss said. Some of the sanctions on banks or transport could restrict the ability of companies to finance or deliver products. “This, right now, is what the businesses are concerned with,” he said.

Many well-known German firms have already abandoned business in Iran.

In January, Siemens AG said it would halt any new business with Iran. Daimler AG decided to sell off its Iranian holdings, and insurance providers Allianz SE and Munich Re AG also announced they were cutting ties. Deutsche Bank AG cut off its business in Iran under political pressure in 2007.

Hamburg-based HHLA Hamburger Hafen & Logistik AG, a port-terminal company owned primarily by the city in which it is based, halted its plans to work with an Iranian firm in the modernization of port terminals.

A wide range of Italian companies, from car markers to fashion companies, operate in Iran, but the bulk of Italy’s exports to Iran is machinery that could come under heightened scrutiny. Over the decades, Tehran has also given Italian oil companies access to developing some of its largest oil fields.

Italian oil company Edison SpA operates the Dayyer offshore block in the Persian Gulf. Under a contract with the National Iranian Oil Co., Edison is expected to invest about €30 million over four years to find and develop potential oil reserves around Dayyer. An Edison spokesman declined to comment on the EU’s plans.

Over the past year, the Italian government has begun to put pressure on Italian energy companies to scale back their operations. Italian oil giant Eni SpA, which has operated in Iran since the 1950s, has reined in its activity there amid pressure from Rome and the U.S. The company operates Darkhovin, one of Iran’s biggest oil fields, but plans to hand over management of the field “at some point” this year, according to its 2009 annual report. Eni declined to comment.

Total SA, France’s largest oil company and the world’s fourth-largest, once was active in Iran through buyback contracts where it financed and developed operations, then sold them to the national oil company. It has entered into such buyback contracts for four Iranian fields, but for each development operations have been completed.

However, Total says it is still waiting for reimbursement related to some of these fields.

In refining and marketing, Total has a 50% share in Beh Total, with the other half belonging to Behran Oil. The company produces and markets lubricants to Iranian consumers, and in 2009 generated revenue of €27.4 million.

Renault SA has had operations in Iran since 2004, and now makes cars through two joint ventures, a Renault spokeswoman said. But production is modest, and fell last year to 37,000 vehicles from 56,000 in 2008, due to production difficulties related to suppliers’ financing problems.

One area where Iran is considered vulnerable is on imports of gasoline, where Iran suffers shortages.

According to a European official, the EU considered imposing explicit sanctions on gasoline imports to Iran but backed off after the Netherlands and Germany voiced opposition.

However, several European oil-trading companies, including Royal Dutch Shell PLC, Vitol and Trafigura, already announced this year that they wouldn’t sell gasoline to Iran—though oil traders say some gasoline from such companies still finds its way to Iran via third parties.