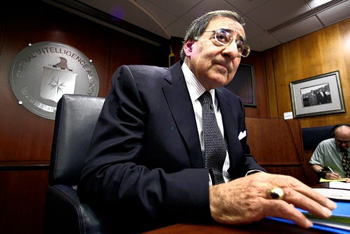 WASHINGTON—Central Intelligence Agency Director Leon Panetta said Iran has enough fissile material for two atomic bombs, and that it could develop nuclear weapons in two years if it wanted, in the Obama administration’s starkest assessment to date of Tehran’s nuclear work.

The CIA chief’s comments mark a further distancing of the U.S. government from a controversial 2007 National Intelligence Estimate, compiled by Washington’s 16 spy agencies, that concluded Tehran had stopped developing atomic weapons in 2003.

The office of the Director of National Intelligence, the U.S.’s top intelligence body, has been preparing a new NIE that was expected to be released as early as last December.

But senior U.S. officials involved in the intelligence process said the DNI has had to delay its completion due to the introduction of significant, new intelligence in recent months.

Mr. Panetta’s statements, made during an appearance on ABC News’s “This Week” on Sunday, indicated that U.S. intelligence agencies had significantly changed their analysis of the state of Iran’s nuclear work.

Pressed on whether this included efforts by Iran to weaponize its nuclear program, Mr. Panetta responded: “I think they continue to work on designs in that area.”

Iran has continually said its nuclear program is for civilian, not military, use.

Many European and Arab governments said they had already discounted the findings of the 2007 NIE. But a formal hardening of the U.S. intelligence community’s assessment of Iran’s nuclear work could limit President Barack Obama’s hopes of using diplomacy to end the standoff with Tehran over its nuclear program.

Last year, Mr. Obama unveiled intelligence that showed Tehran had developed a secret site in the Iranian city of Qom to enrich uranium.

Tehran has announced in recent months that it had begun enriching uranium at levels closer to weapons grade. In recent weeks, Iranian officials have also said they were limiting the activities inside Iran of some inspectors from the United Nations’ nuclear watchdog, the International Atomic Energy Agency.

The IAEA in a May report on Iran’s nuclear program estimated that Tehran has produced roughly 2,400 kilograms of low-enriched uranium at its nuclear facilities.

Nuclear experts say this is enough to build two atomic weapons, if the fissile material were enriched further to weapons-grade levels.

Iran recently began producing nuclear fuel enriched to 20% purity, but it would need to process it further to about 90% purity, to create the fissile reaction for an atomic weapon.

Mr. Panetta said it would take Iran roughly a year to produce the highly enriched uranium needed for a nuclear weapon, once the decision was made to produce it.

He said it would take an additional year “to develop the kind of weapon delivery system” needed to carry atomic warheads.

The U.N., European Union and U.S. Congress all imposed substantial new economic sanctions on Iran this month in an effort to curb Tehran’s nuclear work.

The sanctions seek to cut off Iran from the global financial system and to hobble its oil-and-gas sector. The measures also target the businesses of Tehran’s elite military unit, the Islamic Revolutionary Guard Corps.

Mr. Panetta on Sunday expressed doubt that these new financial penalties would be enough to pressure Iran into ending its nuclear activities.

“Those sanctions will have some impact.…It could help weaken the regime. It could create some serious economic problems,” he said. “Will it deter them from their ambitions with regards to nuclear capability? Probably not.”

Members of Prime Minister Benjamin Netanyahu’s government have indicated that they believe Tehran could have deployable nuclear weapons within a year.

“I think, you know, Israel obviously is very concerned, as is the entire world, about what’s happening in Iran,” Mr. Panetta said. “I think they feel more strongly that Iran has already made the decision to proceed with the bomb. But at the same time, I think they know the sanctions will have an impact.”

Relations between Messrs. Obama and Netanyahu have been strained in recent months, particularly over the White House’s demands that Israel stop construction in disputed East Jerusalem. These tensions have fueled concerns among some European and Arab officials that Israel might attempt to attack Iran’s nuclear infrastructure, even without Washington’s consent. But Mr. Panetta stressed that the U.S. and Israel were closely coordinating all of their activities related to Iran.

Adm. Mike Mullen, chairman of the Joint Chiefs of Staff, arrived in Tel Aviv Sunday, where he was scheduled to meet with Israeli Defense Minister Ehud Barak and the commander of the Israeli Defense Forces, Gen. Gaby Ashkenazi, said U.S. and Israeli officials.

The two sides have been closely sharing intelligence on the state of Iran’s nuclear work, according to officials from both countries, as well as on the spread of conventional weapons across the Middle East. U.S. and Israeli officials have voiced concerns in recent weeks over the increasingly sophisticated long-range missiles that they allege Iran and Syria have been providing to militant groups fighting the Israeli army, particularly Hezbollah in Lebanon and Hamas in the Palestinian territories.

Both Syria and Hezbollah have disputed one of the strongest allegations made recently by the U.S. and Israel, that Damascus is providing the militant group with long-range Scud D missiles.

US probed BHP Billiton trade with Cuba and Iran

The Australian: THE US SEC looked into BHP Billiton's...