Washington Post: The Iranian nuclear scientist who claimed to have been abducted by the CIA before departing for his homeland Wednesday was paid more than $5 million by the agency to provide intelligence on Iran’s nuclear program, U.S. officials said. 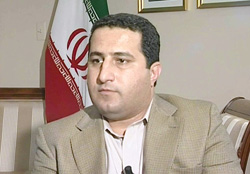 The Iranian nuclear scientist who claimed to have been abducted by the CIA before departing for his homeland Wednesday was paid more than $5 million by the agency to provide intelligence on Iran’s nuclear program, U.S. officials said.

Shahram Amiri is not obligated to return the money but might be unable to access it after breaking off what U.S. officials described as significant cooperation with the CIA and abruptly returning to Iran. Officials said he might have left out of concern that the Tehran government would harm his family.

“Anything he got is now beyond his reach, thanks to the financial sanctions on Iran,” a U.S. official said. “He’s gone, but his money’s not. We have his information, and the Iranians have him.”

Amiri arrived in Tehran early Thursday to a hero’s welcome, including personal greetings from several senior government officials. His 7-year-old son broke down in tears as Amiri held him for the first time since his mysterious disappearance in Saudi Arabia 14 months ago.

In brief remarks, Amiri told reporters, “I am so happy to be back in the Islamic republic,” and he repeated his claims of having been abducted by U.S. agents. He said CIA agents had tried to pressure him into making propaganda against his homeland and offered him $50 million to remain in the United States.

Amiri also said that he knew little of Iran’s main nuclear enrichment site. “I’m a simple researcher. A normal person would know more about Natanz than me.”

Amiri’s request this week to be sent home stunned U.S. officials, who said he had been working with the CIA for more than a year.

Whether the agency received an adequate return on its investment in Amiri is difficult to assess. The size of the payment might offer some measure of the value of the information he shared. But it could also reflect a level of eagerness within the U.S. intelligence community for meaningful information on Iran.

The U.S. official said the payments reflected the value of the information gleaned. “The support is keyed to what the person’s done, including how their material has checked out over time,” said the official, who, like others, spoke on the condition of anonymity because of the sensitivity surrounding the case. “You don’t give something for nothing.”

The transfer of millions of dollars into Amiri-controlled accounts also seems to bolster the U.S. government’s assertions that Amiri was neither abducted nor brought to the United States against his will. Given the amount of money he was provided, a second U.S. official said, “I’m sure he could have been very happy here for a long time.”

The payments are part of a clandestine CIA program referred to as the “brain drain.” Its aim is to use incentives to induce scientists and other officials with information on Iran’s nuclear program to defect.

The Iranian government maintains that its nuclear research is strictly for peaceful purposes. But the United States and other nations contend that Iran is secretly pursuing a nuclear bomb. Acquiring intelligence on the country’s nuclear capabilities and intentions is among the highest priorities for U.S. spy agencies.

Amiri, 32, is known to have worked at Iran’s Malek-e-Ashtar Industrial University, which U.S. intelligence agencies think is linked to the nation’s Revolutionary Guard Corps, a powerful entity accused of activities ranging from weapons research to supporting terrorist groups.

The scientist is not believed to have had direct access to Iran’s most sensitive nuclear sites or leaders involved in decisions on whether to pursue a bomb. Still, officials said Amiri was valuable in confirming information from other sources and providing details on multiple nuclear facilities.

Iran has already begun to take advantage of the Amiri case, with state television echoing his claims that he was abducted and describing his return as a national victory. Awaiting Amiri at the airport Thursday were Hassan Qashqavi, a high-ranking Foreign Ministry official, and other ministers.

The CIA has authority to bring as many as 100 people into the United States each year under a provision of the 1949 Central Intelligence Agency Act that enables the agency to bypass ordinary immigration requirements.

Promises of resettlement and reward money are two of the primary inducements used by the CIA to recruit informants inside “hard target” countries, including North Korea and Iran.

The money that went to Amiri was apparently placed in accounts or investment mechanisms that would sustain him over a lifetime in the United States. “You basically put together a long-term benefits package,” one of the U.S. officials said.

Although Amiri might no longer be able to access the accounts, it was not clear whether the CIA would be able to reclaim the funds. The U.S. officials declined to disclose where the funds had been deposited.

State Department spokesman P.J. Crowley would not disclose Amiri’s immigration status while he was in the United States or the reason he had been in the country. “He was here of his own volition and left of his own volition,” Crowley said. “If he wants to talk about this, he can.”

The CIA’s payments to Amiri add to what has become one of the more bizarre recent episodes in espionage. Amiri disappeared in Saudi Arabia last summer and then resurfaced in a series of contradictory Internet videos this spring.

In some, he claimed to have been abducted, drugged and subjected to CIA torture to get him to talk. In another recording, apparently produced with help from the CIA, Amiri insisted that he had come to the United States of his own accord and said he was living in Tucson while pursuing a PhD.

One of the U.S. officials said Amiri’s family was a main factor in his decision to return. “He just wanted to see his family and, unfortunately, he chose a dumb way to do it,” the official said, “lying about what happened to him here to try to build up his credibility back home.”