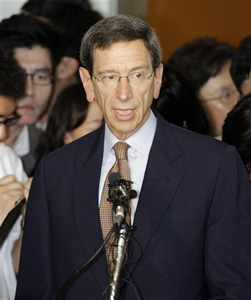 Robert Einhorn, the State Department’s special adviser for nonproliferation and arms control, made Seoul a first stop on his Asian tour to encourage allies to act aggressively to enforce sanctions against North Korea and Iran, nations he said constitute “two of the greatest threats” to nuclear nonproliferation.

He met Monday with South Korean officials to discuss the sanctions that Secretary of State Hillary Rodham Clinton announced during her own trip to Seoul two weeks ago.

Specific new measures to be adopted soon by the U.S. target entities that buy or sell arms in violation of U.N. Security Council resolutions, engage in illegal activities to bring in hard cash, or conduct trade to bring in luxury goods, he said.

“We know that these activities bring hundreds of millions of dollars in hard currency annually into North Korea, which can be used to support DPRK nuclear or military programs or fund luxury goods purchases,” Einhorn said at a Seoul news conference.

He said Washington is concerned about a global network of trading firms involved in proliferation-related activities and said the U.S. would urge other nations to pressure banks in their nations to freeze those companies’ accounts.

“These measures are not directed at the North Korea people,” Einhorn said. “Instead, our objective is to put an end to the DPRK’s destabilizing proliferation activities, to halt illicit activities that help fund its nuclear and missile programs and to discourage further provocative actions.”

North Korea is believed to have enough weaponized plutonium for at least half a dozen nuclear bombs and last year revealed it has a uranium enrichment program that would give the regime a second way to make atomic weapons.

“One means of addressing these challenges is to increase the pressures felt by these two governments so that they recognize that it is in the best interests of their countries to meet their international obligations and forsake nuclear weapons,” he said.

Five nations — China, Russia, South Korea, the U.S. and Japan — have been trying for years to negotiate with North Korea to dismantle its nuclear program in exchange for aid and other concessions. Pyongyang abandoned those talks last year.

Washington and Seoul also accuse the North of sinking a South Korean warship in March. Forty-six sailors died in an explosion that an international team of investigators pinned on a torpedo fired from a North Korean submarine.

Einhorn was accompanied by Daniel Glaser, the Treasury Department’s deputy assistant secretary for terrorist financing and financial crimes, did not provide details about how or when the sanctions would be carried out.

They head to Tokyo on Tuesday for talks with senior Japanese officials and will head to China later in the month. Other U.S. officials will travel to the Middle East and South America in coming weeks for similar meetings.

Bloomberg: The U.S. and Israel are disagreeing publicly over...

AP: An unassuming college math student has become an...