Washington Post: President Obama put the issue of negotiating with Iran firmly back on the table Wednesday in an unusual White House session with journalists. His message was that even as U.N. sanctions squeeze Tehran, he is leaving open a “pathway” for a peaceful settlement of the nuclear issue. 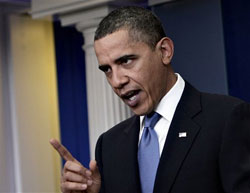 President Obama put the issue of negotiating with Iran firmly back on the table Wednesday in an unusual White House session with journalists. His message was that even as U.N. sanctions squeeze Tehran, he is leaving open a “pathway” for a peaceful settlement of the nuclear issue.

“It is very important to put before the Iranians a clear set of steps that we would consider sufficient to show that they are not pursuing nuclear weapons,” Obama said, adding: “They should know what they can say ‘yes’ to.” As in the past, he left open the possibility that the United States would accept a deal that allows Iran to maintain its civilian nuclear program, so long as Iran provides “confidence-building measures” to verify that it is not building a bomb.

The renewed opening to Iran also included a proposal for talks on Afghanistan. Obama said he favored a “separate track” for discussion of this issue, in which the two sides have a “mutual interest” in fighting the Taliban. He urged that, as part of Afghan President Hamid Karzai’s push for “reintegration” with the Taliban, Iran should be included in regional talks about stability. “Iran should be a part of that and could be a constructive partner,” he said.

Why is Obama talking engagement with Iran when many analysts are debating the growing risks of a military confrontation? Administration officials cite two factors: First, the sanctions against Iran are beginning to bite, making Tehran potentially more interested in dialogue; and second, U.S. intelligence reports indicate that the Iranians have had technical troubles in their nuclear-enrichment program — which allows more time for diplomacy.

The White House chose an unusual way to send its signals to Tehran. A small group of journalists was invited to a “background session” on Iran policy with “senior National Security Staff.” The briefer turned out to be Obama. An official said later that the president plans more of these unscripted, informal meetings.

Obama has tried to engage Iran before but has little to show for it. Last year, he sent two secret letters urging dialogue to Iran’s supreme leader, Ayatollah Ali Khamenei. This helped get the Iranians to the table in Geneva to discuss a plan for enriching uranium outside their borders. But Khamenei backed out, even though Iran’s hard-line president, Mahmoud Ahmadinejad, initially supported the deal.

Obama said he hadn’t had any direct contact with Khamenei or Ahmadinejad about renewing talks, but he said Iranian officials have said they want to rejoin the Geneva negotiations with the group of leading nations known as the “P5-plus-one,” perhaps in September.

Obama’s sense that the time is right for diplomacy is shaped in part by what he called “rumblings” from Tehran that the sanctions are having a greater effect than the Iranians expected. Officials said these signs include the strike last month by Tehran bazaar merchants who are unhappy about the battered economy, as well as recent signals through various channels that the Iranians want to come back to negotiations.

A senior official who briefed the journalists after Obama left the room said sanctions are more effective now because there are “better tools” to target the Iranians, “more cooperation” from U.S. allies — and because the Iranians are “more vulnerable.” Another senior official stressed that “sanctions are not an end in themselves,” but a way of influencing Iran’s cost-benefit analysis.

What came through in Obama’s upbeat presentation was the administration’s view that for all Tehran’s bombast, the United States and its allies have the upper hand.

One reason for this confidence is that Iran appears to be having serious technical problems with its enrichment process — due to bad design, bad luck or deliberate sabotage. A senior official said that only 3,800 centrifuges were now operating at Natanz, at only about 60 percent of their design capacity, with another 4,000 in reserve to cope with breakdowns.

U.S. officials also appear increasingly confident that because of Iran’s setbacks and aggressive monitoring by U.S. intelligence, it will be hard for Tehran over the next year or two to achieve either a “breakout,” where it announces it has a bomb, or a “sneak out,” where it reaches that goal surreptitiously.

Obama’s strengths were on display Wednesday in his strategic analysis and his command of detail. Skeptics in Israel and elsewhere would question whether Iran subjects its nuclear policy to a cost-benefit analysis. But Obama, uncertain about that issue himself, is at least proposing to put it to the test.

Bush says aim is to end tyranny in Iran

Iranian oil buyers that could be subject to US sanctions