Reuters: The head of the U.N. nuclear watchdog urged Iran on Tuesday to take “concrete steps” to allay international concerns about its disputed nuclear program. 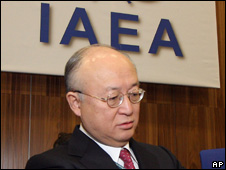 MOSCOW (Reuters) – The head of the U.N. nuclear watchdog urged Iran on Tuesday to take “concrete steps” to allay international concerns about its disputed nuclear program.

Six global powers have proposed revived talks with Iran on restraining its nuclear program and opening it up fully to IAEA scrutiny in exchange for trade and diplomatic benefits. Iran has not formally responded to the offer.

Tehran says it is enriching uranium strictly for electricity generation. But Western nations fear this is a front for the pursuit of nuclear weapons, noting Iran’s track record of concealing sensitive enrichment-related activity from the IAEA.

The Islamic Republic has persistently rejected international calls to scale down or stop its enrichment of uranium, a key ingredient in nuclear arms, and has not formally responded to an offer of talks in Vienna on November 15-17.

Amano said potential negotiations were among the issues he discussed with Russian Prime Minister Vladimir Putin on Monday.

Iran’s talks with global powers stalled a year ago, leading to new sanctions from the U.N. Security Council in June.

Iran’s relations with the IAEA have become tenser since Amano took office late last year because he has adopted a blunter approach than predecessor Mohamed ElBaradei, for example by stating in a report that intelligence indicates Iran has sought to develop a nuclear-tipped missile.

Iran earlier on Tuesday announced a key step toward putting its first nuclear power plant on-line, saying fuel was now being loaded into the core of the Russian-built facility near Bushehr.

“Preparations, activities at Bushehr are going on under IAEA safeguards,” Amano said. Both Iran and Russia say Bushehr poses no nuclear risk of nuclear weapons proliferation.

The United States long urged Russia scrap the project, arguing it could help Tehran develop weapons. An agreement obliging Iran to return spent fuel to Russia eased U.S. concerns that the fuel could be reprocessed into bomb-grade plutonium.

Reuters: The Dutch government has sought consular access to...