Iran says no offer can stop it enriching uranium 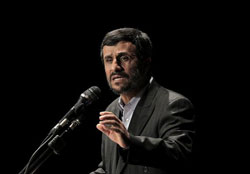 A day after the U.N. atomic watchdog said it had new evidence of possible military dimensions to Iran’s nuclear work, Ahmadinejad accused it of doing Washington’s bidding and said Tehran’s atomic advances had “no brake and no reverse gear.”

The head of the International Atomic Energy Agency, Yukiya Amano, said on Monday the IAEA had received “further information … that seems to point to the existence of possible military dimensions to Iran’s nuclear programme.”

That contradicts Iran’s insistence that its nuclear work is for entirely peaceful purposes, and Ahmadinejad made clear his displeasure with the Japanese IAEA chief who has taken a blunter approach than his Egyptian predecessor Mohamed ElBaradei.

“With America’s orders (the IAEA) has written some things in a report that are against the law and against the agency’s regulations,” Ahmadinejad told reporters.

“These have no legal value and aside from harming the agency’s reputation it will have no other effect.”

Tehran says sanctions imposed by Washington, Europe and the United Nations are not hitting its economy and insists they will not force it to give up what it considers its sovereign right to enrich uranium, a process that can make fuel for power plants or, by enriching uranium more highly, provide bomb material.

“I have said before that Iran’s nuclear train has no brake and no reverse gear … We will continue our path,” Ahmadinejad said, adding that Iran would continue to cooperate with the IAEA “as long as they move based on justice.”

Asked whether the world powers that have held talks with Tehran in the past to seek an end to the nuclear impasse could offer any incentive to stop Iran’s enrichment, he answered with the one word: “No.”

Two rounds of talks between Iran and the five permanent members of the U.N. Security Council, the United States, Russia, China, Britain and France, plus Germany (P5+1), in Geneva in December and in Istanbul in January, did not reach any substantive result.

Iran has said it is willing to resume talks, but its insistence that other countries recognise its right to enrich uranium is a major stumbling block, particularly for Western diplomats who see it as an unacceptable pre-condition.

The EU foreign policy chief, Catherine Ashton, who represented the P5+1 at the talks, said last month she wanted a “stronger and better” reply from Iran to her call to revive the talks.

Israel and the United States say they do not rule out pre-emptive military strikes to stop Iran making nuclear bombs.

As well as blaming Washington for Amano’s comments, Ahmadinejad used his news conference to condemn U.S. interference in the Middle East, including Bahrain, the tiny Gulf island state that hosts the U.S. Fifth Fleet and whose crackdown on pro-democracy protests Tehran has condemned.

“The problem is not between the authorities and the people, the problem is America’s military base in Bahrain,” he said.

On Syria, Iran’s main ally in the region in its stand against Israel, he said: “I condemn the interference of America and its allies … We believe that Syrians themselves are capable of managing their own affairs.”

There are U.S. troops in two of Iran’s neighbours — Iraq and Afghanistan — and Ahmadinejad predicted Washington would try to extend its presence in a third — nuclear armed Pakistan.

“We have information that in order to gain more control over Pakistan, to weaken the Pakistani nation and government, the Americans want to sabotage Pakistan’s nuclear facilities,” he said, adding that damage to nuclear plants would be a pretext for a greater U.S. presence in the country.