Reuters: For the Iranian government, the Bushehr nuclear power plant is proof to a world worried about Tehran’s intentions that its atomic program is aimed only at securing a modern, clean energy source for its people. By Yeganeh Torbati 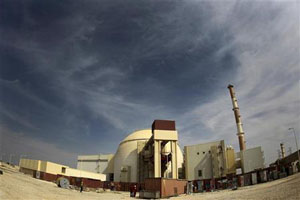 DUBAI (Reuters) – For the Iranian government, the Bushehr nuclear power plant is proof to a world worried about Tehran’s intentions that its atomic program is aimed only at securing a modern, clean energy source for its people.

But for villagers living next to the facility, as well as Arab capitals nearby, the plant poses a potential danger that is less geopolitical and more immediate: the risk of contamination.

“We are extremely worried about our health and the health of our families,” residents of the coastal villages of Heleylah and Bandargah wrote in a statement published on a blog in 2010.

Thousands of people live in the two villages 18 km (11 miles) south of the Gulf city of Bushehr, many of them making their living as service workers at the plant.

Residents living near Iran’s nuclear-related sites told Reuters in interviews by phone and over the Internet that the government stifles debate on the pros and cons of the program and where its sites should be located, and has not addressed their questions about what would happen in an emergency.

Iran’s Arab neighbors are also nervous. Kuwait, Bahrain, Saudi Arabia, Qatar, Iraq and the United Arab Emirates all occupy coastline across from Bushehr, and the plant is closer to five Arab Gulf capitals than it is to Tehran.

Kuwaiti emir Sheikh Sabah al-Ahmed al-Sabah said at a December meeting of the Gulf Cooperation Council that Iran should cooperate with the International Atomic Energy Agency to “ensure the safety of the region’s states and its people from any effect of radioactivity”.

Iran has repeatedly maintained there are no grounds for concern, a position backed up by Russian state nuclear corporation Rosatom, whose subsidiary Atomstroyexport built the plant and plans its formal handover to Iran this year.

But a few recent incidents, as well as a lack of transparency, continue to worry both neighbors and experts in global nuclear safety, particularly after the disaster at the Fukushima power plant in Japan, which was caused by an earthquake and tsunami.

Like Japan, Iran is on an earthquake fault line, although the risk of a tsunami in the Gulf is seen as slim.

“It is difficult to have confidence that Bushehr will meet the very high safety standards that should apply to every nuclear power plant in the world in the post-Fukushima era,” Edwin Lyman, of the Union of Concerned Scientists, said in an e-mail to Reuters.

Iran is the only country operating a nuclear power plant that does not belong to the 75-nation Convention on Nuclear Safety, negotiated after the 1986 nuclear disaster in Chernobyl which contaminated wide areas and forced about 160,000 Ukrainians from their homes.

Inspectors from the IAEA, the U.N. nuclear watchdog, visit the Bushehr plant occasionally to check the nuclear material kept there, but not to conduct safety inspections. The U.N. agency has wider powers when it comes to preventing the spread of nuclear arms than it has to ensure reactor safety in member states.

Western officials and the United Nations have urged Iran to join the safety forum, designed to boost safety through peer review and mutual oversight.

There are some indications of progress.

Iran’s ambassador to the United Nations, Mohammad Khazaee, wrote in a letter to the New York Times on January 15 that Iran has “started the internal legal procedures to accede to the Convention on Nuclear Safety”.

In another step that could help allay concerns, Iran has officially requested the IAEA to send an international expert mission to review operational safety at Bushehr, according to a schedule posted on the UN agency’s website. Such missions are voluntary for IAEA member states.

One problem is that Iran’s nuclear regulatory authority, INRA, is not considered independent by the IAEA because it is contained within the Atomic Energy Organisation of Iran, Iran’s nuclear agency, Lyman said.

“Given the overheated political context of Iran’s nuclear facilities, the lack of a regulator independent of the agency for development and promotion of nuclear energy raises questions about its effectiveness,” he said.

The United States and some other Western countries believe Iran is trying to develop nuclear weapons and have imposed harsh financial and trade sanctions to try to stop it. Iran denies that is its intent.

But Bushehr is not considered a major weapons proliferation risk by Western states, who are focused on sites where Iran has enriched uranium beyond levels needed to fuel power plants.

An IAEA mission conducted a review of safety regulations at Bushehr in 2010 and recommended that Iran establish INRA as an independent authority, hire more expert technical staff and replace its current ad hoc regulations with a comprehensive national system.

The 1,000-megawatt Bushehr plant, which was connected to the national grid only in September 2011, has had a long and chequered history.

Germany’s Siemens started construction in 1975 during the reign of the U.S.-backed Shah, but work stopped after the 1979 Islamic Revolution and it was damaged by air raids in the Iran-Iraq war of the 1980s.

After Russian engineers took over the project in the 1990s, the launch was further delayed by disagreements between Tehran and Moscow as well as technical problems. For example in February 2011, concerns that metal particles from the aging parts used in the reactor core may have contaminated the fuel prompted the fuel’s removal.

In October 2012, fuel had to be unloaded again and the plant shut down. A Russian nuclear industry source told Reuters in November the shutdown was due to the discovery of stray bolts beneath the fuel cells. Experts said such debris can cause problems by damaging fuel rods, blocking coolant channels and causing overheating, or clogging pipes and pumps.

The plant is now back to 100 percent capacity, Iran said in January.

Iran, as well as officials of Rosatom and its subsidiaries, have repeatedly said the delays at Bushehr were in part due to the need to ensure safety.

“We have always taken every step to ensure safety and are prepared to continue to work with the operator to do everything that is necessary to ensure safety,” Rosatom spokesman Sergei Novikov told Reuters.

IAEA chief Yukiya Amano said in December the procedure was not of particular concern.

“They are taking necessary measures,” he said on a visit to Washington. “Removing the fuel is already a measure to remedy the situation, and we have good communication on this issue.”

Malcolm Grimston, a nuclear energy expert at Imperial College, London, agreed the Bushehr plant should not be a safety concern as long as proper inspections have been carried out.

But it was important that for any new plant, authorities “put quite a lot of effort into building communication links with local people and letting them understand the context in which the plant operates,” he told Reuters.

The nuclear programme is highly politicized in Iran and few officials publicly question its validity.

When emergency official Gholamreza Masoumi spoke to the Mehr news agency in November about health problems among people near Isfahan’s Uranium Conversion Facility and the importance of preparing agencies for a nuclear accident, his comments were taken down from the agency’s website and denied by other officials.

“It’s not totally clear (to us) if the plant has started or not. No one knows what’s going on,” said Saeed, 22, a college student from Heleylah who, like other Iranians interviewed, did not want his last name used so he could speak freely.

The Bushehr plant has brought some good to the people of Heleylah, Saeed said. Locals can find work as janitors, cooks and other service workers at the plant, and they have access to the hospital built on site.

But many residents feel stuck, said Hassan, 62, who was raised in Heleylah and now lives in the city of Bushehr.

The government has drawn up plans to move residents, but compensation has still not been agreed.

“The villagers want to go to a place where they won’t have trouble finding work, and near the center of the province,” he said. “But because there is no appropriate place for them to go, and the government hasn’t provided enough money for them to move, people are in limbo.”

Saeed said although many in Heleylah would like to leave the area, only about 10 percent have done so.

“Those who could afford to leave, have left.”

(Additional reporting by Fredrik Dahl in Vienna and Steve Gutterman in Moscow; Editing by Sonya Hepinstall)

AFP: A recount of votes in Baghdad yielded no...