US believes Iran deal ‘possible’ at next talks

AFP: US officials gearing up for new talks with Iran said Friday a deal could be struck next week in the decade-long bid to rein in its nuclear program, but warned tough issues and Congress could still scupper the negotiations.
By Jo Biddle 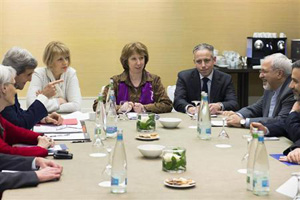 Washington (AFP) — US officials gearing up for new talks with Iran said Friday a deal could be struck next week in the decade-long bid to rein in its nuclear program, but warned tough issues and Congress could still scupper the negotiations.

“We are going to work very hard next week. I don’t know if we’ll reach an agreement. I think it is quite possible that we can. But there’s still tough issues to negotiate,” a senior administration official told reporters.

The official also renewed pleas to skeptical US lawmakers not to slap more sanctions on Iran in the mistaken belief it would force the Islamic republic “to the point of capitulation” and the dismantling of all its nuclear activities.

“I personally don’t believe surrender would come any time soon, it is a culture of resistance,” said the official, warning that if there were new sanctions Iran “would move forward with its nuclear program … and we would find ourselves with no other option but a military one.”

Iranian Foreign Minister Mohammed Javad Zarif will join political directors from the six powers negotiating a freeze to Iran’s suspect nuclear program for a new round of talks in the Swiss city from Wednesday.

This year’s election of new Iranian President Hassan Rouhani, seen as a moderate, has given fresh impetus to the negotiations which had sputtered and stalled in recent years.

But many countries, including Israel, have warned that overtures from Iranians are merely a ploy to win sanctions relief, and that they are not really planning to halt uranium enrichment — a first step towards arming a nuclear weapon.

At the end of three-day talks in Geneva the so-called P5+1 group presented a “stronger” and “improved” draft deal to Iran which had “greater clarity” on a number of issues.

The aim is to rein in Iran’s uranium enrichment program and set up a system of strict verification and monitoring in return for relief from crippling sanctions while all sides negotiate a final deal over the next six months.

But the negotiations ended in the early hours last Saturday “because I think the parties, particularly Iran, felt they needed to go back and look at this document which was quite tough, consider it and come back to negotiations,” the US official said.

The official downplayed reports of divisions among the P5+1, comprised of the five nuclear powers Britain, France, China, Russia and the United States, as well as Germany, saying it was normal that each capital had weighed in with changes to the document.

And while officials stuck to an agreement not to reveal any details of the proposal, it is understood it would give Iran access to “a very small fraction” of its assets frozen in bank accounts around the world.

“Iran has approximately $100 billion in reserves, the vast majority of which is overseas. They have limited or no access to that reserve,” another senior administration official said.

“These declining exports are costing Iran up to $5 billion a month, and have cost Iran along with our other sanctions about $120 billion,” he said.

“So the relief that we are considering as part of the initial phase would be limited, temporary, targeted and reversible,” he said, insisting the core structure of sanctions would stay in place.

Shooting down reports that the US and world powers were planning a major package of sanctions relief, he said “it would come nowhere near helping Iran escaping the hole that we’ve put them in,” adding it was “way south” of reports that valued it at $15 billion or $30 billion.

Since returning from Geneva, officials have been locked in “hard” discussions with US lawmakers seeking to head off a new sanctions.

“The P5+1 believes these are serious negotiations, they have a chance to be successful. For us to slap a new set of sanctions in the middle of it they see as bad faith with them.”

EU urged to step up sanctions on Iran  British daily

Reuters: The Russian and Iranian energy ministries signed a...