Iran Focus – Editorial: Many Iran watchers have perhaps been most struck by the outstanding political activism of women during a year-long unprecedented tidal wave of political unrest 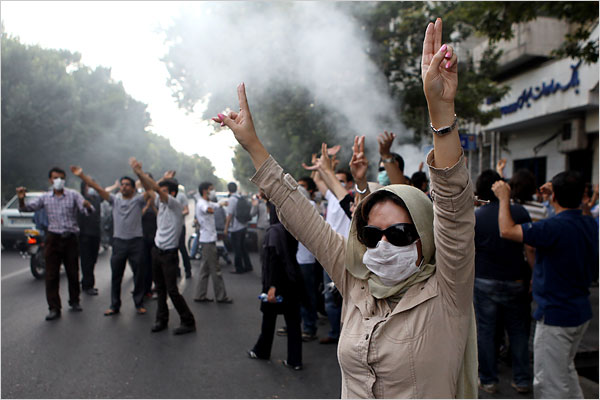 Many Iran watchers have perhaps been most struck by the outstanding political activism of women during a year-long unprecedented tidal wave of political unrest. Indeed, the de facto symbol of the uprisings is Neda Aqa Soltan, a young woman whose fatal shooting by security forces during a peaceful rally in Tehran was captured on film and shocked the world. Women’s rekindled activism, however, has understandably been a source of growing aggravation and trepidation for the weary rulers in Tehran.

The regime has recently begun a vociferous campaign of intimidation and terror to dissuade people from observing the uprising’s anniversary in June with more protests. A major portion of the suppressive drive is geared towards the emboldened women under the pretext of “mal-veiling.” So-called chastity security forces have established a heighted presence in Iran’s streets, warning, arresting and at times handing out $1,000 fines for what they perceive to be violations of veiling.

Tellingly, Friday prayer leaders, who articulate the views of Iran’s Supreme Leader in various cities, have begun harping on the subject of mal-veiling as “an assault by the enemy.” They have even warned that ‘promiscuous’ women are to be blamed if Tehran is struck with an earthquake. For them, this is not so much a personal choice but something that embodies a certain degree of “social sensitivity.” Several weeks ago, the state-run news agency ILNA reported that 40 parliament members grilled the Interior Minister about an increase in the flouting of mandatory veiling laws, ultimately prompting him to vow more serious measures by the ministry this month.

It is true that Islamic fundamentalists in Iran have legally instituted forced veiling and suppression of women since taking power in 1979. Ever since then, this has been used as a leverage to control and pacify a disenfranchised population in general and women in particular. But after the June 2009 protests and a pronounced role of women in political dissent, mandatory veiling and women’s suppression have become suddenly much more significant and vital for the regime.

The regime’s campaign of “combating mal-veiling” actually unveils two truths: First, that it is a weak and unstable state with socially entrenched vulnerabilities; And second, that there is a vast and mostly untapped force among Iranian women, which is only gradually revealing itself. Both truths bode well for the democratic-leaning Iranian people and spell disaster for the ruling theocracy and all international players who seek to embrace it as a negotiating and trade partner.

Reuters: A newspaper editor and well-known critic of Iran's...

There is support for increasing sanctions on Iran in...
Editorial

The rush to Tehran amidst rise in executions