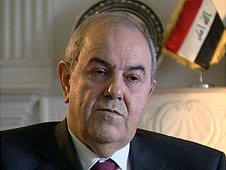 Allawi, a secular Shiite whose political party won the largest bloc in March 7 elections, said Iraq’s stalled political process and its faltering economy are breeding extremism, according to a transcript of the program, scheduled to be broadcast tomorrow.

Political paralysis has gripped Iraq since the election, with Allawi and incumbent Prime Minister Nuri al-Maliki locked in a power struggle to amass the largest number of seats in parliament and gain the right to form a new government. Allawi has the backing of 130 members of the 325-seat assembly, compared with 132 for al-Maliki’s Shiite-led State of Law group, al-Sumaria television reported.

“We are entering into a kind of vicious circle,” Allawi said on CNN. “The extreme forces are trying to sabotage the stability of the environment to create more scope for themselves to operate in.”

Allawi draws support from secular Shiites and Sunni Muslims, a minority group in Iraq. His Iraqiyah bloc is trying to bolster support by intensifying their efforts to lure deputies from al-Maliki’s alliance.

The State of Law coalition this month won the support of Moqtada al-Sadr, the anti-American Shiite cleric, and his backers, giving the incumbent an advantage. Al-Maliki still needs more allies to gain a simple majority.

Both leaders have drawn criticism from senior Iraqi clergy for their trips in the region to gain support from neighbors such as Syria and Iran. Al-Maliki traveled this week to Damascus to meet Syrian President Bashar al-Assad. His office said this week that he may soon visit Gulf nations and Jordan.

The political impasse has made kingmakers of Iraq’s Kurds, who hold about 53 seats in the assembly. They are negotiating with both Allawi and al-Maliki. In 2006, their support allowed al-Maliki and his Shiite coalition to take power.

The Kurds, strong U.S. allies in Iraq, are making a series of demands in exchange for their support, including the right to administer their own oil fields, according to the Washington Post.