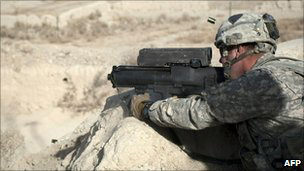 Coalition forces face a new threat as Iran steps up covert support for terrorist operations in Afghanistan and Pakistan, The Times of London reported Friday.

At the end of a year in which 102 British soldiers have been killed, intelligence officials have revealed that the Iranian government is releasing significant Al Qaeda terrorists from jail so that they can help to reorganize its battered structures in border areas of Pakistan.

In a move that would further complicate efforts to bring peace in the region, Iran is also directly supporting Taliban militants in southern Afghanistan. On Thursday, NATO confirmed the first capture in Afghanistan of a member of the elite al Quds force of the Iranian Revolutionary Guards Corps.

The al Quds officer was captured in a U.S. special forces raid in Kandahar on December 18 and is accused of supplying weapons from Iran to Taliban fighters for attacks on British and American troops.

“The targeted insurgent is a member of the Quds force according to intelligence reports,” the NATO press office in Kabul confirmed.

Speaking on condition of anonymity, intelligence officials in a Middle Eastern country and in Pakistan told The Times that Iran had offered active support to Al Qaeda in recent months.

Previously Tehran’s involvement was limited to turning a blind eye to the movement of Al Qaeda fighters across its territory. “In many cases they are being facilitated by Iranian Revolutionary Guards,”one senior Pakistani intelligence official said.

The men released include Sayf al-Adel, a Libyan who is one of the most capable figures in the original Al Qaeda structure and was involved in the bomb attacks in Kenya and Tanzania in 1998; Abu al-Khair al-Masri, a highly intelligent former member of Egyptian Jihad and confidant of the Al Qaeda ideologue Ayman al-Zawahiri; Abu Mohammad al-Masri, an explosives expert involved in the 1998 African bombings; Mahfouz Ould al-Walid, one of the original Al Qaeda religious scholars; and Suleiman Abu al-Gheith, a Kuwaiti who was Al Qaeda’s official spokesman at the time of the September 11 attacks.

The intelligence officials claimed that three members of Usama bin Laden’s family were also among those released. All the Al Qaeda figures released in recent months are understood to have been rounded up after they fled U.S. forces in Afghanistan in 2001. They have been reported to be under house arrest north of Tehran, held by Iran as a strategic asset.

Intelligence sources said that the releases were partly driven by a deal for the release of Heshmatollah Attarzadeh, an Iranian diplomat who had been kidnapped by Al Qaeda and the Taliban-linked Haqqani network, which is based in North Waziristan, in the Federally Administered Tribal Areas of Pakistan.

Iran claimed that his freedom was secured through a “complicated intelligence operation.” But Pakistani officials told The Times that it was in exchange for the release of a number of militants as well as some heavy weaponry. Money is also thought to have formed part of the deal.

Pakistani officials said that al-Adel has now been named as Al Qaeda’s chief of operations for Afghanistan and Pakistan and has been responsible for organizing attacks on both sides of the border in recent weeks. But the organization has not publicized the appointment amid a relentless blitz by U.S. drones, which have launched 113 strikes in the border areas this year, killing 12 senior Al Qaeda figures.

One senior Pakistani official told The Times that the increasing Iranian support for Al Qaeda and the Taliban had alarmed Pakistan and its close ally Saudi Arabia.

It was revealed in the diplomatic cables released by WikiLeaks that Saudi Arabia had begged the U.S. to bomb Iran’s nuclear facilities.