AP: On a cold March morning last year, an Iranian diplomat was flown home nearly 15 months after being kidnapped by gunmen in an ambush on the Pakistani side of the Khyber Pass. 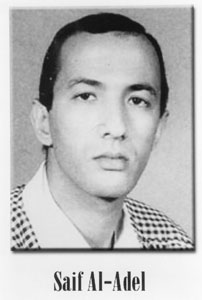 DUBAI, United Arab Emirates (AP) — On a cold March morning last year, an Iranian diplomat was flown home nearly 15 months after being kidnapped by gunmen in an ambush on the Pakistani side of the Khyber Pass.

Iran hailed the release as a victory for its intelligence agents, who they claimed staged a rescue mission into the tribal areas along the Afghan-Pakistan border. Western officials and others saw it differently: A turning point in Iran’s dealings with al-Qaida.

Negotiations to free the captive diplomat are believed to have reached high-level al-Qaida figures, Western officials say. In return for its help, al-Qaida demanded better conditions for dozens of people close to Osama bin Laden who have been held under tight security in Iran, including some of the terror chief’s children and the network’s most senior military strategist Saif al-Adel.

The apparent result has been greater freedom of movement for al-Adel, who has long been a top al-Qaida figure and only grew in importance after bin Laden was killed by Navy SEALs in May. Bin Laden’s longtime deputy, Ayman al-Zawahri, took over the reins as al-Qaida’s leader after bin Laden’s death.

Since the release of the captive Iranian diplomat, al-Adel has been given more freedom to travel to Pakistan — making at least one trip in the past year — and allowed to open more contacts with others in al-Qaida leadership, said Western intelligence officials who closely follow al-Qaida operations.

That could mark a significant shift in the long hazy relationship between Iran and al-Qaida. Since 2001, Iran has appeared a somewhat reluctant host for senior al-Qaida operatives who fled there after the U.S. invasion of Afghanistan, keeping them under tight restrictions. Now, though Iran remains on the edge of al-Qaida’s orbit, it seems to be a more comfortable haven for those operatives.

Despite his travel to Pakistan, al-Adel has so far chosen to remain based in Iran with his wife and family, said the officials, who spoke on condition of anonymity to discuss intelligence matters.

This suggests that al-Adel and perhaps lower-level al-Qaida figures now consider Iran a viable outpost, with fewer restrictions and the added security that a U.S. commando raid or drone strike on Iranian soil is unlikely. Al-Adel, an Egyptian who allegedly helped mastermind the 1998 bombings of U.S. embassies in Africa, is among the FBI’s most-wanted terrorists and the U.S. is offering a $5 million reward for his capture.

“There are a number of reasons an al-Qaida leader would feel comfortable these days in Iran,” said Theodore Karasik, a regional affairs expert at the Dubai-based Institute for Near East and Gulf Military Analysis. “Chief among them is a mutual enemy: America.”

The life of the al-Qaida-linked exiles in Iran is still very much a blind spot to Western intelligence agencies. Very few firm details have emerged, such as how much Iran limits their movements and contacts.

Iran has made no public comments on bin Laden’s family members believed to be on its soil, nor about al-Adel and others in the al-Qaida braintrust believed to have spent time in the country and may still be there. They include Atiyah Abdul-Rahman, a Libyan high in the al-Qaida hierarchy; Abu Mohammed al-Masri, a top figure in the al-Qaida’s “Military Committee,” which al-Adel is believed to head; and Abu Hafs al-Mauritani, a senior spiritual adviser in the terror network.

“The story of al-Qaida and Iran is one that often is hard to figure out,” said Karasik. “But there is a sense that Iran is not just a bystander. Links to top figures like al-Adel gives Iran channels to al-Qaida’s inner workings if they want to go on that path.”

With al-Zawahri leading the al-Qaida, al-Adel is likely to remain a behind-the-scenes organizer and planner of possible new attacks.

“Al-Adel has been in a caretaker position since bin Laden’s death because of his military experience within al-Qaida,” said Noman Benotman, a security analyst in London and former jihadist with links to al-Qaida in Afghanistan, Pakistan and Sudan.

Benotman and other analysts said al-Adel opposed the Sept. 11 attacks — accurately predicting the U.S. would topple the Taliban and force al-Qaida from its Afghan bases, according to the report by the Sept. 11 Commission. Al-Adel, however, has apparently repaired any rifts with al-Qaida chiefs and is believed to be a confidant of fellow Egyptian al-Zawahri.

The apparent easing of the Iran’s restrictions on al-Qaida — possibly linked to the dealmaking over the abducted Iranian diplomat Heshmatollah Attarzadeh — now opens up speculation that al-Adel could establish a “satellite office” for the group in Iran, said an Arab security official, who spoke on condition of anonymity in keeping with government briefing rules.

Still, there’s long been much tension in the relationship between Iran and al-Qaida.

Some hard-line militants backing al-Qaida — which is made up entirely from Islam’s majority Sunnis — consider Islam’s Shiite branch, which dominates Iran, as heretical, and they view Tehran’s regional ambitions as a greater threat than the West. Sunni insurgents in Iraq have used car bombs and suicide attacks against Shiite targets, killing thousands since 2003, as well as targeting Shiite militias allied to Iran.

In January, the al-Qaida faction in Yemen declared “holy war” against Shiite rebels that get apparent indirect support from Tehran.

Iran also was a major foe of Afghanistan’s Taliban, which sheltered al-Qaida before the Sept. 11 attacks and remains its close ally. In 1998, eight Iranian diplomats were killed when Taliban forces overran Mazar-e-Sharif in northern Afghanistan and were accused of the systematic slayings of Shiites. The rights group Amnesty International said Taliban fighters stormed the Iranian consulate as part of its anti-Shiite purges. The U.N. Security Council denounced it as a “criminal act.”

Iran’s leaders sensed an opportunity when, amid the post-9/11 turmoil, bin Laden relatives and scores of al-Qaida figures and foot-soldiers fled into its territory from Afghanistan.

Iran put many under house arrest-style limits but refused to send them to U.S. allies, such as Saudi Arabia, where they could face extradition or interrogations by American forces. Tehran’s leadership believed that holding bin Laden relatives and al-Qaida officials could offer a guarantee against attacks by the terror group’s anti-Shiite elements. It, too, was another chip to play in the messy shakeout in Afghanistan, where Iran has deep cultural and economic ties.

At the same time, Iran cooperated with the West against al-Qaida.

In 2003, Iran gave the U.N. Security Council the names of 225 al-Qaida suspects detained after illegally crossing into Iran and deported to their countries in the Middle East, Europe and Africa.

A former Bush administration official, Hillary Mann Leverett, told the AP in 2008 that Iran had rounded up hundreds of Arabs who had crossed the border from Afghanistan, expelled many of them and made copies of nearly 300 of their passports in an effort to help the U.S. counter al-Qaida after 9-11.

It was a moment of rare common purpose between Iran and Washington that could have opened doors for greater diplomatic overtures. Instead, Iranian officials say they felt blindsided by being named in 2002 as part of President George W. Bush’s “axis of evil” after cooperating on identifying al-Qaida suspects.

In May, Iran’s Foreign Ministry spokesman Ramin Mehmanparast said the United States has no excuse to keep troops in the Middle East after killing bin Laden.

The extent of Iran’s loosening the reins on al-Qaida figures and bin Laden on its soil remains unknown. Among the late terror chief’s relatives in Iran are one of his wives and several children and grandchildren. Early last year, one of bin Laden’s daughters, Iman, managed to flee one of the compounds in Iran to reach the Saudi Embassy in Tehran. She was eventually allowed to leave Iran to resettle in Syria.

Even bin Laden’s own family has sent mixed messages to Iran.

Last year, one of bin Laden’s sons, Khalid, dispatched a letter to Iran’s Supreme Leader Ayatollah Ali Khamenei claiming that his relatives were mistreated and “beaten and silenced” — bringing a warning to Iran from al-Qaida’s branch in North Africa. Khalid was among those killed in the U.S. raid on bin Laden’s compound in Pakistan.

Khalid’s half-brother, Omar bin Laden, gave a sharply different assessment of Iran’s handling of his relatives. “I know 100 percent that my brothers and sisters have been well treated” in Iran, he said in March 2010 from London. “They have told me from their own mouths.”