Toronto Star: Nasrin Sotoudeh’s awards would cover a wall. But 49-year-old Iranian human rights defender has no walls on which to hang them. She is entering the fourth week of a hunger strike that her family fears she will not survive. The Toronto Star 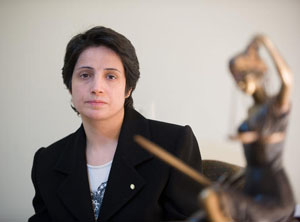 Nasrin Sotoudeh’s awards would cover a wall. But 49-year-old Iranian human rights defender has no walls on which to hang them.

The slight, dark-haired lawyer is locked in a grim solitary confinement cell in Tehran’s Evin prison, where she is sentenced to six years on charges of threatening national security and spreading anti-government propaganda. She is entering the fourth week of a hunger strike that her family fears she will not survive.

For months Iran’s ministry of intelligence, which runs the prison, refused Sotoudeh family visits, and she was kept in isolation in the same jail where some of the people she defended are held. After authorities discovered she was using a tissue to write her defence for an upcoming court hearing, she was only allowed to see her children from behind a glass barrier.

But on Monday, her daughter Mehraveh, 12, and son Nima, 5, were allowed to visit her briefly, after they waited with their father Reza Khandan at the gates of the prison for more than three hours the previous day.

“The children were allowed to see their mother for a few minutes in the presence of security agents,” Khandan wrote on his Facebook page, adding that he and other family members were kept outside.

“We were not even allowed to accompany them inside the prison to make sure they had successfully passed the guards at the entrance,” he said.

It was harassment of her family that reportedly prompted Sotoudeh’s hunger strike, which began Oct. 16.

“The Iranian authorities have imposed a travel ban on her daughter and on one occasion held her husband overnight in prison for peaceful advocacy on her behalf,” said Amnesty International. “This is a shocking example of the lengths to which Iran will go to suppress criticism of their policies and practices.”

A well-known women’s and children’s rights activist, Sotoudeh campaigned against the death sentence for minors, and Iran raised the age of execution to 18.

Supporters say her arrest may have been triggered by her work with Nobel laureate Shirin Ebadi’s Centre for the Defence of Human Rights. Ebadi, who went into exile after threats against her life, infuriated the clerical regime by publicizing numerous rights violations in Iran.

In 2011, Sotoudeh was sentenced to five years in prison for “violating the Islamic dress code” when she appeared without a head scarf years earlier during a filmed acceptance speech for a 2008 human rights prize.

She was later given a six-year sentence on the more serious political charges, but the total term was cut to six years, with a 10-year ban from practising law in Iran.

The Iranian Canadian Congress has urged Ottawa to join in an international campaign for Sotoudeh and other political prisoners, after a call for her release by U.S. Secretary of State Hillary Clinton and other Western leaders.

Sotoudeh’s treatment is not uncommon in Iran, where lawyers who defend human rights or political prisoners are threatened with jail. At least 42 — including Sotoudeh’s own lawyer — have faced harassment, prosecution or imprisonment since June 2009, according to the U.S.-based International Campaign for Human Rights in Iran.

“The judiciary has essentially criminalized human rights-based lawyering,” it said.

In a letter reportedly sent by Sotoudeh from prison, she told her children: “I know that you require water, food, housing, a family, parents, love and visits with your mother. (But) just as much you need freedom, social security, the rule of law and justice.”

Canadian photojournalist Zahra Kazemi died under torture in Evin prison in 2003, and two men from Canada — Saeed Malekpour and Hamid Ghassemi-Shall — are under execution orders.

Sattar Beheshti, a 35-year-old blogger and government critic, died under interrogation last week. A report Tuesday said three members of the prison staff had been arrested in connection with the case.

AFP: The US Senate has called for Iran's Revolutionary...