After killing at a bazaar, Iran declares 2 days off 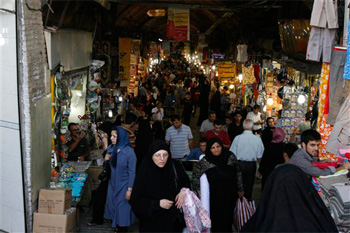 TEHRAN — The Iranian government declared a sudden, two-day national holiday on Sunday and Monday, after a long-simmering dispute between President Mahmoud Ahmadinejad and the Tehran bazaar erupted last week, leaving one prominent merchant dead, according to opposition Web sites.

Shopkeepers in Tehran’s traditional bazaar district called a strike last Tuesday to protest what was rumored to be a planned 70 percent rise in income taxes. The government denied the rumors, calling them a misunderstanding that resulted from a “mistake” in the way the plan was presented.

But a prominent textile trader was killed when pro-government militiamen and police officers raided the bazaar on Wednesday, demanding that shopkeepers reopen for business, opposition Web sites reported. One member of the textile merchant’s guild was said to have been arrested on Wednesday after addressing a crowd and calling for the strike to continue.

Officials cited excessive summer heat and energy consumption as the reason for the holiday, but weather forecasters said that recent temperatures in excess of 100 degrees were normal for this time of year.

The sudden announcement raised questions among opposition lawmakers, who noted that the country already had 26 official national holidays and hardly needed more.

“When we are all looking to reduce the number of national holidays, why announce more holidays for any reason?” asked one member of Parliament, Nasrallah Torabi, in an interview with Parleman News, a Web site for reformist members of the Parliament. “Unless there is some other reason which the government must now explain to the people.”

Government offices will reopen Tuesday, and examinations at public universities have been rescheduled. However, most private businesses and independent educational establishments were open on Sunday and Monday, as is customary.

This is not the first time the government has declared a sudden holiday for reasons that some have seen as political. An extended weekend was announced in February, before Iran’s annual mass rally to mark the anniversary of the Islamic Revolution. There was speculation then that the government had called the holiday to encourage people to leave the capital, as part of its ultimately successful efforts to blunt opposition protests.

The bazaar, Iran’s centuries-old system of trade and commerce, remains a central economic institution in all of its major cities. The bazaar played a significant role in overthrowing Shah Mohammed Reza Pahlavi in 1979, and remains closely allied with the clergy. In return for their loyalty, the merchants had been allowed to operate largely free from competition or taxes.

But that arrangement began to change with the election of Mr. Ahmadinejad, who came to office in 2005 determined to introduce structural changes in the economy and to squeeze needed tax revenues out of the bazaar.

In October 2008, for example, merchants in Tehran and several major cities closed down for several days to protest a proposed sales tax, which the government was then forced to suspend. The bazaar has suffered further as trade and commerce have shifted to a new private sector dominated by educated businessmen and the rise of Iran’s Islamic Revolutionary Guards Corps as an economic empire, one aligned with Mr. Ahmadinejad.

Reuters: The U.N. nuclear watchdog has offered to guarantee...