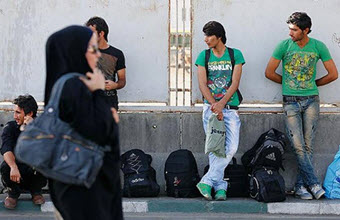 Tehran, 27 Apr – Unemployment has turned into a serious crisis in Iran, state media are reporting. President Hassan Rouhani had prioritized improvement of the economy and unemployment in his agenda; however, not only has he failed to deliver on his promise but the number of unemployed, especially among the young people, has increased.

On 24 April, Tasnim News Agency, which is affiliated with the Revolutionary Guards Quds Force, quoted Gholamreza Mesbahi Moqaddam, a member of the parliamentary Planning and Budget Committee, as saying, “Currently, we have seven million unemployed young men and women in the country. Presently, the villages are becoming depleted of population because there are no jobs or water”.

Omran Alizadeh, head of the paramilitary Bassij Organization in Gilan, northern Iran, acknowledged in an interview with Tasnim on 17 April that the number of unemployed among the educated people and university graduates stands at over one million. “Jobs have not gone up and the number of the unemployed among the educated and university graduates has sharply increased. Statistics show that the number of unemployed for this group was 750,000 in [Persian year] 1393 and this number topped one million in 1394 (year ending 19 March 2016)”.

The head of Iran’s Islamic Councils board Ali Aslani stated on 22 April that there are 150,000 unemployed in Alborz Province, western of Tehran, who have masters degrees or higher. He added that one should ask how a worker with a monthly wage of $230 can make ends meet.

The government has set the minimum wage at $230 per month. Ali Aslani noted that on the basis of the prices of foodstuff for a family of three in Alborz Province, the minimum wage should be $670.

Adel Azar, the head of the government’s Statistical Centre, said in an interview on 13 April with Iranian state radio and television that “the unemployment rate for ages 15 to 29 is 23.3% in the country… which is considered a crisis”.

The scale of the economic crisis in Iran is such that senior government officials are now acknowledging it. A while ago, Rouhani government’s spokesman reported that 7,000 production units were stagnant. Rouhani’s Minister of Labour reported that there were workers who had not received wages for seven months.

Reuters: The five permanent members of the U.N. Security...

Halliburton Will Withdraw From Energy Projects in Iran