By PETER FRITSCH in Washington and DAVID CRAWFORD in Berlin

As the international sanctions noose tightens around Iran’s nuclear program, Tehran is increasingly relying on a small, Iranian-owned bank in Germany to conduct business on behalf of the regime’s blacklisted companies, Western officials say.

The European-Iranian Trade Bank AG—known as EIH Bank for its German initials—has done over a billion dollars of business for Iranian companies associated with Iran’s conventional military and ballistic missile procurement programs, including companies blacklisted by the U.S., the United Nations and the European Union, according to a person familiar with the matter. 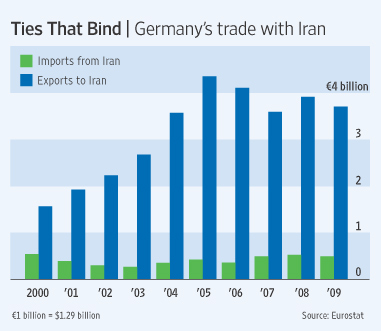 In 2009, Western officials say, EIH appears to have been involved in a broad sanctions-evasion scheme, conducting euro-denominated transactions on behalf of Iran’s Bank Sepah, a bank under broad U.N., European and U.S. sanctions for facilitating Iran’s weapons trade and proliferation activities.

Details of the transactions allegedly facilitated by EIH, including the kinds of goods traded and the identities of the sellers, couldn’t be learned.

A spokesman for EIH, which is based in the German city of Hamburg, declined to comment. Bank Sepah didn’t return calls seeking comment.

EIH is on a U.S. Treasury blacklist, and U.S. officials have raised concerns about the recent uptick in the bank’s activities with Germany. President Barack Obama last month signed into law a bill that could bar foreign banks and companies from doing business in the U.S. if they do business with Iran.

A spokesman for Germany’s banking oversight agency, BaFin, says the U.N. Security Council—not the U.S.—sets the standard by which Germany imposes sanctions on Iranian banks operating in Germany.

EIH “is not mentioned in the U.N. Security Council resolutions,” and therefore may operate freely under German banking law, the BaFin spokesman said.

That could change in coming weeks. “Consultations are under way at the European level to decide whether other institutions should be designated with sanctions,” said Tobias Pierlings, a spokesman for Germany’s Economics Ministry. “The prerequisite for any designation is concrete evidence of participation by the person or entity in proliferation activities.”

EU foreign ministers are set to meet July 26 to discuss new EU sanctions targeting Iranian trade. Those talks follow a European commitment last month to increase restrictions on Iran’s financial transactions. The U.S. is pushing the EU to add EIH and others to its blacklist.

Critics of the global sanctions regime say the lack of harmonization among U.N., EU and U.S. sanctions allows Tehran to exploit the differences and continue to finance its nuclear ambitions. U.S. sanctions are by far the most far-reaching: Washington bans business with all of Iran’s major state-owned banks. In the U.N., Russia and China have supported softer penalties.

Of the four Iranian banks registered in Germany, only EIH is free of any sanctions or controls, according to German officials. That’s because EIH hasn’t been sanctioned by the U.N., and Germany and other EU governments take their cue on sanctions from the U.N., not from the U.S.

EIH was founded by a group of Iranian merchants in Hamburg in 1971. It operates openly under the supervision of German bank regulators. Officials say it has become an important locus in Europe for facilitating Iranian trade in euros.

A pressure campaign led by the U.S. Treasury has caused many major European banks and businesses to restrict or abandon dealings with Iran. As some of those banks have pulled back, EIH has become more important in helping Iranian firms finance trade, Western officials say.

BHF was particularly active in banking for Iranian companies, according to people familiar with the matter. But Deutsche Bank—which does substantial business in the U.S.—has sought to unwind that business. EIH has stepped into the resulting void to aid Iranian transactions, Western officials say.

“Deutsche Bank has been a very good citizen on this,” one official said.

A Deutsche Bank spokesman said BHF’s board has ruled out any new business with Iranian counterparties and will exit existing business arrangements with Iranian companies to the extent legally possible. He added that the bank is considering “all its options for BHF Bank including the option of selling BHF.”

Still, Germany remains the Islamic republic’s largest trading partner in Europe, a fact that is earning Berlin unwelcome scrutiny in the wake of efforts to deepen sanctions against Tehran. Though major firms such as Siemens AG have committed to wind down business ties to Iran, German trade between the countries totaled about $1.8 billion in the first four months of this year, up nearly 20% over the like period in 2009.

A recent report by Avi Jorisch, a former U.S. Treasury analyst, found that five German banks still maintain accounts with Iranian entities under sanction by the U.N. It isn’t clear, however, how active those accounts are.

Though EIH remains free of broad international sanctions, it is closely affiliated with companies blacklisted by the U.N.

In November, the U.S. Treasury unilaterally imposed sanctions on Bank Mellat and its CEO and chairman, Ali Divandari. Mr. Divandari is a member of EIH’s supervisory board. He couldn’t be reached for comment.

EIH’s business has ticked steadily upwards. Since the end of 2007, the Iranian state has doubled its investment in EIH. In 2005, the bank reported having processed transactions valued at about €1.5 billion. In 2008, the last year complete results are available, the bank’s 92 employees handled transactions valued at about €3.3 billion, according to its annual report. At the end of 2008, the bank reported nearly €2.8 billion in assets.

An EU voice of caution

International Herald Tribune: During the run-up to the U.S.-led...

Questions Arise Regarding Airstrike on Iranian Base in Syria

Iran Focus London, 3 Dec - According to reports, a base...