Washington Post: Just weeks after the United States and the United Nations imposed new rounds of sanctions on Iran, Tehran’s ability to ship vital goods has been significantly curtailed as some of the world’s most powerful Western insurance companies cut off Iranian shippers out of fear that they could run afoul of U.S. laws, the insurers say. 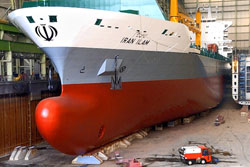 TEHRAN — Just weeks after the United States and the United Nations imposed new rounds of sanctions on Iran, Tehran’s ability to ship vital goods has been significantly curtailed as some of the world’s most powerful Western insurance companies cut off Iranian shippers out of fear that they could run afoul of U.S. laws, the insurers say.

The new measures pose a serious test for Iran. In particular, the U.S. sanctions, which threaten to penalize foreign companies that sell fuel and other refined petroleum products to Iran, have forced ports and freighting companies across the globe to reevaluate their Iranian business. Dozens of Iranian vessels that transport crude oil, industrial equipment and other goods and supplies in and out of the Islamic Republic have been denied insurance coverage for weeks, insurance company representatives said.

“Iranian-flagged ships are facing problems all over the world as they currently have no insurance coverage because of the new sanctions,” said Mohammad Rounaghi, deputy manager of Sea Pars, an Iranian company that provides services for international ship owners and maritime insurance companies. “Basically, most ports will refuse them entry if they are not covered for possible damages.”

In a blow to Tehran, maritime insurer Lloyd’s announced this month that it would stop underwriting gasoline imports to Iran, a move that analysts say will probably prompt other insurers to follow. “Lloyd’s will always comply with applicable sanctions,” Sean McGovern, its general counsel, said in a statement. “The U.S. is an important market for Lloyd’s and, in recognition of this, the market will not insure or reinsure refined petroleum going into Iran.”

But Russia and India have made it clear that they intend to continue legitimate trade with Iran, providing Tehran with hope that some nations will accept its solution for the insurance crisis: coverage guaranteed by the Iranian government.

“These sanctions have not affected us much,” said Mohammad Hussein Dajmar, the managing director of the Islamic Republic of Iran Shipping Lines (IRISL), which has 160 ships in its fleet. “The world has many ports. We will sail to those nations that want to do business with us.”

In recent weeks, IRISL, which was privatized four years ago and was specifically targeted by the sanctions, has approached several insurance companies to reinsure its fleet of ships, according to a representative of a Dutch maritime insurer who requested anonymity because of the sensitivity of the subject. The shipping firm is seeking “protection and indemnity” insurance needed to gain entry to almost every port worldwide. “They knocked on our door asking for help,” the representative said. “But we have many business interests in the U.S. so we are forced to deny them service.”

BP, meanwhile, has canceled its contract with Iran Air in Hamburg, Germany, the company said last week, citing the new trade sanctions. Even the U.S.-based Educational Testing Service has stopped registration for its tests in Iran because, under the U.S. sanctions, it can no longer accept payments from the Islamic Republic. The company’s popular Test of English as a Foreign Language is required for acceptance to universities worldwide, and the move could hurt the chances of young Iranians hoping to study abroad.

In an effort to compel Iran to halt its uranium enrichment, the U.N. Security Council last month imposed a wide range of military and financial sanctions on Iran, including a call for nations to prevent their financial institutions from insuring or reinsuring ships suspected of carrying banned weapons components. Members were also asked to report to the U.N. on Iran’s efforts to set up front companies to conceal its shipping activities.

Congress this month adopted far more stringent measures designed to target foreign companies that sell gasoline and other refined petroleum products to Iran. Although Iran is the second-largest oil producer in the world, it lacks refining capacity and relies on foreign suppliers for nearly 5 million gallons of gasoline a day. Iran claims its uranium enrichment program is needed to develop energy, but the United States and others believe Iran is seeking to build nuclear weapons.

In a retaliatory move, Iran’s parliament on Tuesday passed a bill calling for cargo inspections of any ship from a country that inspects Iranian vessels under the sanctions. Iranian leaders have made clear that such inspections will occur in the narrow Strait of Hormuz.

The U.S. sanctions have angered many governments, including Russia, China and India, which claim the United States has no right to unilaterally impose U.S. laws on their companies. On Wednesday, Sergei Shmatko, the Russian energy minister, met with the Iranian oil minister, Masoud Mir-Kazemi, and said afterward that Moscow has no intention of abiding by the U.S. sanctions.

“The sanctions cannot stop us,” he said. “If there is a commercial interest and attractive terms, Russian companies are ready to supply oil products to Iran.” India has also said it would ignore the U.S. sanctions.

“Under the new sanctions, all of these groups are responsible for the cargo the ship is carrying,” the Dutch insurer said, explaining that the companies must prove to the U.S. government that they exercised “due diligence” in checking that the cargo holds no forbidden products. “For most companies, that will just be way too much paperwork.”

Iranian private transporters are worried for the future. Under Iranian President Mahmoud Ahmadinejad, the import of goods, including Chinese textiles and German luxury cars, has increased by 50 percent. “How will we get those products to Iran if there are no ships?” a Tehran-based owner of a family-run international transportation company said. “In today’s globalized world, it is much harder to evade sanctions.”

There are more ominous signs on the horizon for Iranian transporters. The European Union is expected to approve its own sanctions against Iran in the coming days.

A consortium of Iranian government-owned insurance companies last week sought to allay insurers’ concerns, pledging to put up $1 billion as a guarantee. But the offer has received a cool response, according to the Dutch insurer.

“Imagine your oil tanker crashing into a cruise ship filled with Americans in the port of Hong Kong,” the insurer explained. “A billion dollars doesn’t cover that.”

BBC: Police have been deployed on the streets of...

Iran to proceed with uranium enrichment