By Barbara Lewis and Emma Farge 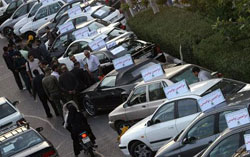 Any refined products it cannot import could be reoffered at discounted rates, dealers said.

In an early indication of a possible new trend, the owner of a gasoline tanker refused to allow the vessel to sail to Iran from Turkey earlier in July.

The cargo was later sold distressed into the U.S. spot market, traders familiar with the deal told Reuters, adding other diverted cargoes had also headed to the United States.

For now, buoyant demand during the summer driving season has masked lost Iranian use, but market fundamentals could change.

“It does not help in a market, which is well supplied. There is an extra amount of cargoes that need to find a home and that puts pressure on the market,” said one Gulf-based analyst.

The biggest effect would be on the Middle East market, said the analyst, who asked not to be named. Others said it could be widespread, adding to a global oversupply of light products.

“For suppliers, it is very tricky for them not to have Iran which paid good premiums for gasoline,” said David Wech of JBC Energy. “Generally in gasoline, you have a situation where there are far too many suppliers and not enough buyers — that will remain an issue after the sanctions.”

U.S. inventories of the motor fuel have risen for the last five weeks and on July 23 stood at 222.2 million barrels — the highest level for that week in 18 years, according to the Energy Information Administration.

Although the world’s fifth largest oil exporter, Iran imports gasoline because its domestic refining is inadequate.

In late July, shipping and trade sources said Iran had received only three cargoes for the month.

At least one more was on the way and traders said Iran could have been stockpiling, but they noted shipments were well below the dozen or so typically needed at this time of year.

Standard gasoline cargoes are 33,000 tonnes, or around 45 million litres, or 280,000 barrels, so eight more on the market would mean roughly 2.2 million barrels extra a month.

Iran has also said it could eliminate imports by the end of the next Iranian year, which runs until March 2012, and could become a gasoline exporter in the next four years.

“Our data suggests that a big expansion in refining capacity is not likely until 2015-2020,” said oil analyst Saket Vemprala of research group Business Monitor International.

It would take time, he said, for investment from countries like China to relieve the pressure on Iran’s refining system.

For now China, and other relatively friendly powers, such as Russia and Venezuela, are expected to continue to supply Iran with some refined products at a premium.

Iran in addition has stop-gap measures, including cutting fuel subsidies to limit demand — although it has to do so gradually to limit the risk of social unrest.

It can also adjust refining operations, add naphtha to eke out supply and use petrochemical facilities to produce gasoline — measures that could add 2-3 cargoes a month, analysts said.

Eventually, Iran’s efforts to increase domestic gasoline could reduce the amount of Iranian crude available for export, with bullish implications for crude futures.

The shorter term reality is extra crude in an already well-supplied market as sanctions make it harder for traders to obtain insurance or pay for Iranian exports in currencies such as the euro and the dollar.

Unsold Iranian crude has stacked up in floating storage.

Iranian officials say the increase is seasonal as demand for its heavier crudes, useful for heating oil, drops in summer.

Other factors are keener competition from Russia and Brazil, and a fall in the number of Asian refiners equipped to process its heavy, sulphur-rich crude, analysts said.

Broker ICAP said in late July 33 million Iranian barrels were floating at sea, down from an all-time peak of 49 million barrels of crude in mid-June, and up from negligible levels this time a year ago.

Around 40 percent of Iran’s 3.6 million barrels per day crude production is destined for Asia so the biggest price impact could be there, but global futures could also react.

“If Iran builds up storage and then sells a large chunk, supply will come in waves. This could add price volatility,” said Lawrence Eagles of JP Morgan.

A storage increase could also widen the contango in the oil market, whereby crude for near-term delivery is relatively cheap, and increase freight costs if it employs many vessels.

AP: Iran's nuclear program is of "critical concern" and...