By Jonathan Saul and Raissa Kasolowsky 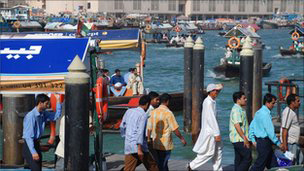 While the latest sanctions have excluded Iranian crude oil sales, refined oil products imports have been affected with more shipowners fearful of being in breach of the measures.

Sources said that there was closer tracking of ships operating in UAE ports which had previously been used by Iran to transport fuel cargoes.

“In the past you could have done discreet shipments from Fujairah and Jebel Ali but at the present time there are no shipments being done from there to Iran,” a trade source said.

Some shipping agents in various ports said they had not experienced greater scrutiny from UAE officials.

While the UAE has tightened its role as a trading and financial lifeline for Iran, nothing has been made public about enforcing sanctions at its ports.

“Dubai is being helpful (in enforcing sanctions) because of the economic crisis. If it were not for this crisis then we would have a different situation,” said Theodore Karasik, of the Dubai-based Institute for Near East and Gulf Military Analysis.

Diplomatic relations between U.S. ally the UAE and Iran, which have strong trade links, are growing increasingly fraught. Gulf Arab governments have shared Western fears that Iran could become a nuclear armed state.

The West suspects Iran’s nuclear work is aimed at bomb-making but Tehran says it is for peaceful purposes. Wide ranging U.S. and European Union sanctions last month have aimed to squeeze Iran’s fuel imports and increase its international isolation.

“A number of governments are under pressure to provide more information. So the U.S. does not need people on the ground literally at the docks to watch ships but more detailed information is being collected,” another source said.

“The footprint of the U.S. government may not have substantially increased, but they are receiving more information.”

The second source said greater scrutiny of UAE ports had been driven by the U.S. Treasury. Stuart Levey, Undersecretary of the U.S. Treasury, has said it would “work to ensure” international sanctions were enforced.

Levey said it would “continue to expose” expected efforts by Iranian officials to work around the bans with tools such as front companies, doctored wire transfers and falsified shipping documents.

“Stuart Levey has been driving the issue by feeding information to other agencies in the U.S. government,” the source said. “The Treasury has taken a great lead in putting the financial noose around Iran.”

Iran is the world’s fifth-biggest crude oil exporter but previous U.S. sanctions mean it has suffered from lack of investment in refineries, forcing the OPEC member to import some 40 percent of its gasoline needs.

Analysts said given the growing heat in the UAE, Iran could potentially use ports in Turkey or possibly Pakistan.

“It’s supposed to be Pakistan that is now emerging as the new hub. Pakistan and Iran have a particularly close relationship,” Karasik said.

The trade source said it was feasible that Iran could seek to import gasoline in trucks from Pakistan.

“They will not export cargoes out of Karachi (port) but it could be transported overland,” the trade source said. “It has been done in the past for jet kerosene and other products over the border.”

“Pakistan already has it from the U.S. over the question of involvement with the Taliban so there is the potential jeopardy in the billions of dollars of U.S. aid versus what they would make marginally from an increase in Iranian trade.”

Pham, who also advises U.S. and European governments on strategic matters, said ports such as Singapore and Hong Kong were also under greater scrutiny.

He said smaller Indian, Indonesian or Malaysian ports including Penang could be used.

“A secondary port in the region might be able to get away with it,” he said. “The possibility that it is closely monitored is that much more reduced.”