AFP: Japan imposed new sanctions Friday against Iran, including an assets freeze on people and entities linked to its contentious nuclear programme and tighter restrictions on financial transactions. 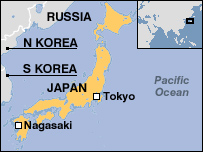 TOKYO (AFP) — Japan imposed new sanctions Friday against Iran, including an assets freeze on people and entities linked to its contentious nuclear programme and tighter restrictions on financial transactions.

Japan also said it would suspend any new oil and gas investments in Iran, but there are no plans to restrict imports of crude oil from the Islamic republic, the fourth-biggest oil supplier to resource-poor Japan.

The steps come a month after Tokyo approved punitive measures in line with a June UN Security Council resolution which slapped a fourth set of sanctions on Iran over its refusal to halt uranium enrichment work.

Japan’s new sanctions include a freeze on the assets of 88 companies, banks, state agencies and other entities and 24 people linked to Iran’s nuclear programme, which many nations fear masks a drive for atomic weapons.

Iran maintains that its nuclear programme is peaceful.

Japan will also bar the individuals on the expanded blacklist of people and groups, which includes the powerful Islamic Revolutionary Guard, from entering the country, a government document said.

The sanctions bar Japanese financial institutions from dealing in equities and bonds that could be linked to the development of nuclear and other weapons of mass destruction, including bonds issued by Iran’s central bank.

The United States, the European Union, Canada and Australia have also announced additional sanctions, which have been opposed by Russia and China, now Iran’s closest trading partner, with major energy interests in the country.

In early August US State Department special adviser for non-proliferation and arms control Robert Einhorn said in Tokyo: “Japan imports a lot of oil from Iran, but the steps we are asking Japan to take would not interfere in any way with Japan’s energy security, its imports of oil from Iran.”

“Our nation has traditionally had a close relationship with Iran,” he told reporters. “From this unique position, we will make persistent calls on the country for the peaceful and diplomatic resolution of this problem.”

Under the changes, the government-linked Nippon Export and Investment Insurance agency will also stop new medium and long-term trade insurance policies that protect Japanese exporters to Iran against possible losses.

“When you think of how many companies would go into a country with such high risk without government backing, it would be very unlikely,” said an official of Japan’s Agency for Natural Resources and Energy.

He added that Iran is now the fourth-biggest exporter of crude oil to Japan, after Saudi Arabia, the United Arab Emirates and Qatar.

“We do not expect these measures to have a significant impact on Japan’s current level of crude oil trade with Iran,” he said.