Los Angeles Times: Iranian officials say international sanctions haven’t kept them from continuing to do business with much of the world. At the Tehran International Industry Fair this month, leaders boasted in a brochure that 25 countries were taking part.

Copies replace Western-made machinery, though Iranians may have to pay higher prices. 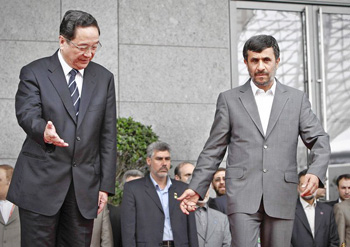 Iranian officials say international sanctions haven’t kept them from continuing to do business with much of the world. At the Tehran International Industry Fair this month, leaders boasted in a brochure that 25 countries were taking part.

But on a visit to the fair, one country stood out: China.

Trade specialists say that Beijing, which conducted nearly $22 billion in trade with Iran in 2009, can supply versions of almost anything no longer imported from Western countries, and can easily circumvent or even ignore the banking complications faced by other nations attempting to do business with the Islamic Republic.

China is building roads in Iran, helping Iranian companies copy Western-made machinery and is poised to take over for French, British and Japanese companies withdrawing from Iran’s oil and gas fields.

“The Chinese are even manufacturing our prayer beads for remembering God in our daily prayers,” said Ali Azhabi, an engineer for an oil platform in the Persian Gulf who attended the four-day trade fair, which concluded Oct. 9.

Iranian officials point to business ties with other nations, including Russia and India, as proof that tightened United Nations, Western and Asian sanctions on Iran are having no discernible effect on its economy. At the fair, business representatives from Turkey, Romania, India and Japan, as well as such Western countries as Germany, France, Italy and Sweden, worked the room, eagerly shaking hands and swapping business cards, hoping any future transactions won’t catch the eye of American regulators or trigger sanctions that bar trade benefitting Iran’s military industry, nuclear program and other portions of its energy sector.

The U.N. Security Council has imposed sanctions on transactions bolstering Iran’s nuclear program and military. The U.S., European Union, Canada, Australia and Japan have also imposed restrictions on Iran’s energy sector. But companies that sell products such as pharmaceuticals, foodstuffs or cosmetics are under no restrictions, although the U.S. seeks to dissuade all countries and companies from any trade with Iran.

Some Iranians at the fair said the foreign presence had been artificially bolstered by combining the 10th annual event with a heating, cooling and air-conditioning exhibition that had long been separate. The highest turnout by far was by Chinese companies, which made up 81 of the 309 foreign firms present.

Chinese support of Iran, a nation of 75 million people, is more than a political move. “China’s development is still export-driven and Iran is a big market,” said John W. Garver, a professor at the Georgia Institute of Technology in Atlanta. “Western sanctions are creating major opportunities for Chinese firms.”

Yang Fang, a Chinese industrial machinery salesman, estimated that the number of Chinese participants at the fair had increased 25% from last year. He stood in a giant hall that is considered premium trade-fair real estate; it had been painted red with stars to resemble the Chinese flag.

Asadollah Asgaroladi, who heads the Iran-China Joint Chamber of Commerce, predicted this year that annual trade between the two countries would reach $50 billion by 2016.

But though China is Iran’s biggest trade partner, surpassing the European Union last year, it may not wind up being the cure to all of Iran’s economic woes, which include high inflation and unemployment rates and a large, inefficient public sector. Despite the boasting from Tehran officials, Iranian businesspeople say sanctions are hurting, and that Chinese firms are not above gouging Iran as China builds its business in the vacuum left by companies from many other nations.

“The Chinese are using the sanctions against us by selling us the raw material for more,” said Behrouz, an businessman at an industrial machinery manufacturer who declined to give his last name. “As our overhead has increased, the prices of our projects are more expensive and less competitive.”

Iranian manufacturers say the quality of Chinese parts and machinery still lags badly behind those from Europe, and Iranians find themselves often forced to quietly turn to the West for equipment on the black market.

“We did provide some information to China on specific concerns about individual Chinese companies, and the Chinese assured us that they will investigate,” he said.

Some at the trade show said official statistics of how much Iran still imports from Europe — including spare parts, machinery and tools — estimated the value at $7 billion to $10 billion. That, they said, is far lower than the real amount. Importers undervalue the official prices on merchandise to avoid customs duties, and much of what comes into the country enters through the black market.

“It is not so easy to substitute the goods we used to import from Europe,” Behrouz said. “And all these maneuvers to import goods cost money and increase the cost of production, so we’re losing ground to others.”

Some also fear that politics may eventually come between Iran and China, as Beijing strives to be seen as a responsible international actor.

“Beijing will do what it can to avoid choosing between friendship with Tehran and amity with Washington,” said professor Garver, author of “China and Iran: Ancient Partners in a Post-Imperial World.” “But if and when it faces such a choice, Beijing will know where its major economic interests lie.”