Iran says oil at $100 would not hurt world economy

AFP: Iran said on Sunday that the world economy is in a position to absorb an oil price of 100 dollars a barrel even as it finds the current price range suitable for investments. 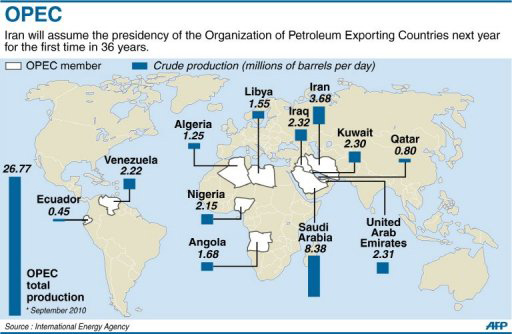 TEHRAN (AFP) — Iran said on Sunday that the world economy is in a position to absorb an oil price of 100 dollars a barrel even as it finds the current price range suitable for investments.

Khatibi also said that the current price range of 70 to 90 dollars was a “suitable” range.

“Not only producers, but consumers have reached this agreement that 70 to 90 dollars is a suitable price for oil because it encourages investment and does not hurt the global economy,” he said.

His remarks come days after OPEC revised upward its world oil demand growth estimates for both 2010 and 2011.

OPEC said it was pencilling in world oil demand growth of 1.32 million barrels per day (bpd) or 1.6 percent to 85.78 million bpd for the whole of 2010, compared with 1.3 percent previously.

And in 2011, oil demand would then increase by a further 1.17 million bpd or 1.4 percent to 86.95 million bpd, instead of the previous estimate of 1.2 percent, the cartel said in its latest monthly bulletin.

Iran is OPEC’s second-largest oil producer and holds around 10 percent of world oil reserves. Last month OPEC members elected Iran to the oil body’s presidency for next year, a first for the Islamic republic.

Iran Ripping off Its Own People to Fund Terrorism