Reuters: Dhows laden with goods bound for Iran line Dubai’s creek. Workmen lift boxes of cheap wares, made in China, onto the creaking wooden vessels ready to make the short journey across the Gulf to the Islamic Republic. 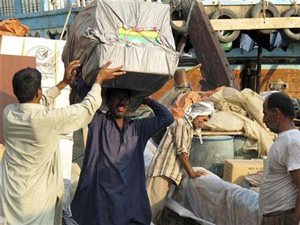 DUBAI (Reuters) – Dhows laden with goods bound for Iran line Dubai’s creek. Workmen lift boxes of cheap wares, made in China, onto the creaking wooden vessels ready to make the short journey across the Gulf to the Islamic Republic.

The buzz of activity belies growing evidence that this traditional trade between Dubai and Iran is suffocating under the ever-tightening grip of sanctions, and businesses fear it could soon become a thing of the past.

The United Arab Emirates has signalled it will rein back its role as a trading and financial lifeline for Iran after the U.N. Security Council imposed a fourth round of sanctions on Iran in June, over accusations it is developing a nuclear bomb.

The measures could spell disaster for many of the Iranian banks and thousands of Iranian businesses who deal with Dubai, which built its reputation on its role as the re-export hub for the Gulf.

“There is a severe impact on trade between the UAE and Iran due to the current sanctions, particularly on the banking sector,” said Morteza Masoumzadeh, vice president of the Iranian Business Council and managing director of Jumbo Line shipping agency.

“Due to the recent sanctions, the Iranian banks’ operations have come almost to a standstill. They have lost their businesses,” he told Reuters in his office on the 14th floor of a building that overlooks Dubai’s busy saltwater creek.

In November, businessmen and traders met the deputy ruler of Dubai to complain of obstacles they face doing business with Iran due to the banking restrictions.

Masoumzadeh said around 8,000 Iranian-owned businesses remained in Dubai after some 400 were forced to close because of the sanctions and the financial crisis.

A sharp decline in Iranian trade could hit Dubai’s economy, still dusting itself off after last year’s debt crisis hit confidence in the emirate that is home to the world’s tallest tower and three man-made palm islands visible from space.

“The anecdotal evidence of a sharp decline in the Iran-bound re-export business is accumulating, although the statistical evidence is still lacking,” said David Butter, Middle East and North Africa director at the Economist Intelligence Unit (EIU).

“However, the new measures are likely to bite in the second half of this year. The effects on Dubai’s GDP will be significant, but should not be overstated.”

In July, Iran still ranked as the second largest re-export destination for the UAE — topped only by India — with the re-export trade worth a total 2.2 billion dirhams ($599 million) in that month alone, UAE customs data showed.

Butter said whatever the decline in trading relations with Iran, Dubai’s trade with other countries appears to be picking up, potentially making up for any losses.

Trade between Iran and Dubai is long established.

The Strait of Hormuz, through which around 40 percent of the world’s oil supplies pass, separates the UAE from Iran by only 54 kilometres at its narrowest point.

Persian traders migrated from towns in southern Iran in the early 20th century and settled along Dubai’s creek, where today the wooden ships dock and boatmen unload spices, clothes and other goods from India, East Africa and Iran.

Exchange traders in the UAE expect that sending money to and from Iran will become increasingly difficult, even though there is no official ban on dealing with Iran’s rial currency.

“We expect a trade drop, so eventually it will affect all other businesses related to the same circle, including money transfers,” Mohamed al-Ansari, chairman and managing director of Abu Dhabi-based Al Ansari Exchange, said.

“The financial sector and banks take extra caution not to be involved, especially when it’s routed transactions which have to go through Europe or the United States. They try to be away from these type of transactions.”

Ansari said money transactions with Iran accounted for less than 5 percent of his business, but authorities had increased inspections, although it was not always easy to determine the nature of transactions in Dubai.

“A lot of surveillance is done and the authorities are watching very closely, money laundering has been reduced very sharply. There is more supervision in terms of money,” he said.

“Some people have already made a move to Turkey and Malaysia, but not in a considerable number. But I’m sure if the situation continues as such, in the very near future there will be a major shift.”

Dubai shocked global markets when Dubai World, a state-owned conglomerate, said last November it would delay its repayment in $26 billion of debt.

Since then, Dubai has been hammering out deals with creditors and getting its projects back on track.

“India, Saudi Arabia and Iraq are all substantial other destinations, and with the development of Maktoum International Airport, Dubai can develop other alternatives further afield,” he said.

BBC: Iran has declared a two-day public holiday in...