AFP: Iranian officials have scoffed at WikiLeaks documents showing calls by Arab leaders for the destruction of Tehran’s nuclear programme, but analysts and observers say this unveiled hostility may indeed impact on Iran’s foreign policy. 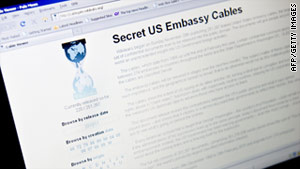 TEHRAN (AFP) — Iranian officials have scoffed at WikiLeaks documents showing calls by Arab leaders for the destruction of Tehran’s nuclear programme, but analysts and observers say this unveiled hostility may indeed impact on Iran’s foreign policy.

US diplomatic memos from Arab countries in the Gulf released by whistleblower WikiLeaks over the past few days uncover a fixation on the Iranian nuclear threat as well as fear that regional conflict is inevitable.

Iranian President Mahmoud Ahmadinejad set the official line on Monday by dismissing the documents as “worthless” and a “mischief”, insisting Tehran’s ties with its Arab neighbours would not be affected.

Iran’s foreign ministry on Tuesday branded the revelations a “suspicious plot” and called on Arab neighbours across the Gulf not to fall into the whistleblower’s “trap.”

“The enemies of the Islamic world are pursuing a project of Iranophobia and disunity,” foreign ministry spokesman Ramin Mehmanparast said.

But Ahmadinejad’s reaction, which is similar to that of many other world leaders, may prove hard to sustain, several diplomats and analysts said.

“The WikiLeaks documents have not unveiled anything. Iranians have long been aware of the sentiments of Arab countries in the Gulf,” a Tehran-based Western diplomat told AFP.

“But having written proof that your neighbours are encouraging your enemy to attack you leaves its mark,” he said.

According to leaked memos, the majority of Arab leaders in the Gulf have pressed the United States to halt Iran’s nuclear programme, with Saudi King Abdullah calling for a US military attack to “cut off the head of the snake.”

The diplomat said the “timing is very bad” too as the revelations come as Tehran appeared to be on course to improve its historically strained ties with Riyadh.

In a rare move, Ahmadinejad spoke to King Abdullah by telephone twice in recent weeks on sensitive regional issues such as Lebanon and Iraq.

The revelations “will not make things easy” for Iran’s foreign policy, the diplomat said.

Several Iranian papers have also not been as dismissive as Ahmadinejad, and carried stinging commentaries and expressed concern on Tuesday.

“The publication of these documents heralds a worrying situation for Iran in the near future,” moderate conservative daily Mellat-e Ma wrote in a commentary.

“If they are authentic, Iran is facing an undeclared war by its neighbours who want a confrontation between Iran and America and see themselves as beneficiaries of that face-off,” it said.

Leading reformist paper Shargh wrote “there was no need for a leak of US state department documents to see the deep hostility of many Arab countries especially the Persian Gulf Arab states towards Iran.

“But the leaked documents confirm all these speculations. Analysts for years have warned against the deepening gap between Iran and Persian Gulf Arab states especially their godfather Saudi Arabia,” it added.

Moderate English-language daily Iran News said the WikiLeaks documents highlight the risks of a conflict in the region and “how frightened the Arab world is of Iran’s rising ambitions and its nuclear programme.”

“Arabs mustn’t be such stupid,” read the headline in its Tuesday editorial.

Iranian diplomacy may have to work to clear up misunderstandings with neighbours, acknowledged Gholam Reza Ghalandarian, director of the conservative paper Qods.

“If there is an issue Iran will deal with it through direct talks,” he told AFP.

Analyst Mohammad Saleh Sedghian, director of the Arab Centre for Iranian Studies in Tehran, believed Iran has adopted a policy of appeasement.

“What is interesting is the smart position taken by President Ahmadinejad when he doubted the validity of the documents and insisting on good relations with the Persian Gulf states,” he noted.

Washington Post: The United States has intelligence that Iran...