Reuters: The Central Bank of Iran has decided to repatriate an unspecified amount of its deposits from foreign bank accounts, its governor said on Monday, citing global economic conditions as the reason. 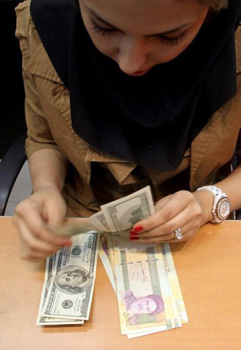 TEHRAN Dec 20 (Reuters) – The Central Bank of Iran has decided to repatriate an unspecified amount of its deposits from foreign bank accounts, its governor said on Monday, citing global economic conditions as the reason.

“The CBI decided to lower the volume of its foreign deposits and transfer them inward by depositing them at domestic banks,” the official IRNA news agency quoted Mahmoud Bahmani as telling a banking seminar.

“It was agreed these deposits should be used to meet the financial needs of domestic projects through hard currency rather than rials so that the domestic inflation rate would not be aggravated,” he said.

Iran has come under tighter economic sanctions since June, aimed at pressuring it to curb its nuclear programme which some countries fear is aimed at making atomic weapons. Some of the measures restrict financial transactions.

In August, Bahmani said Iranian assets had been withdrawn from European banks in an attempt to foil the sanctions. Then as now he gave no further details.

The repatriation of funds might indicate concerns about Iran’s ability to access its cash due to sanctions or a need for more hard currency in Iran to pay for investment projects, some of which have suffered from the withdrawal of foreign companies under sanctions pressure.

In addition to the sanctions pressure, the Iranian economy is undergoing a major shakeup as the government slashes the billions of dollars in subsidies it pays every year to hold down prices of essential items. The policy began in earnest on Sunday when the price of gasoline quadrupled.

Ahmadinejad calls move to eventually eliminate some $100 billion of subsidies “the biggest economic plan in the past 50 years”. While economists say the measure is needed to curb wasteful consumption they say it risks stoking inflation as prices of food, fuel and transport soar. (Reporting by Hashem Kalantari; Writing by Robin Pomeroy; Editing by Toby Chopra)