Reuters: Iran’s parliament approved Mahmoud Ahmadinejad’s annual budget on Tuesday, putting aside differences with a president that lawmakers have often accused of undermining their role in running the Islamic Republic. 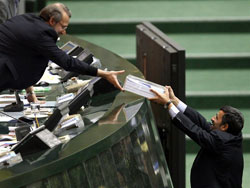 TEHRAN, April 26 (Reuters) – Iran’s parliament approved Mahmoud Ahmadinejad’s annual budget on Tuesday, putting aside differences with a president that lawmakers have often accused of undermining their role in running the Islamic Republic.

The 5,170 billion rial (around $500 billion) budget for 2011/12 was approved with 149 votes in favour, 61 against, and nine abstentions among the 226 members present in parliament, state broadcaster IRIB reported on its website.

The semi official Mehr news agency said on its English language website that the budget was 45 percent bigger than last year. Other news agencies did not give comparative figures.

Ahmadinejad presented the draft budget to parliament on Feb. 20, urging lawmakers to pass it unchanged before the start of the new year on Mar. 21, a deadline they missed by more than a month.

Ahmad Tavakoli, a senior lawmaker who is often critical of Ahmadinejad’s economic policy, said the budget was “harmful to the national economy” as it still left Iran too dependent on oil revenues.

“This budget was more chaotic than previous ones and will further decrease parliament’s rights … there was not enough time to amend it”, he was quoted as saying by IRIB.

Relations between Ahmadinejad and parliament have become increasingly strained in recent years, particularly over budget matters.

Lawmakers have accused him of concentrating power in his own hands. They sacked one of his most loyal ministers in February.

Rifts between Ahmadinejad and other prominent members of the ruling elite have become more apparent since reformist protests that followed the June 2009 vote were suppressed.

Iran, the world’s fifth biggest oil exporter, is under economic pressure from sanctions that have deterred some foreign companies from investing in its energy sector.

One lawmaker said the budget was based on an oil price of $80 per barrel, well below levels over the last two months when prices have soared on world markets largely due to political unrest in the region.

Government representative Ebrahim Azizi told parliament in the new budget dependency on oil revenues was “cut by 33 percent”, according to IRIB.

Critics have accused Ahmadinejad of squandering previous windfall oil revenues that Iran earned when crude prices soared in the first half of 2008.

Iran is undergoing what the government has called major economic surgery, in the form of cuts to the multi-billion dollar subsidies which for years have held down the price of essential goods like fuel and food.

A sustained windfall from high oil prices would better enable the government to offset the impact of sanctions and soften the blow to consumers of any surge in inflation. It already makes monthly cash payments to make up for some of the impact of the subsidy cuts.