Reuters: Iran could have nearly $5 billion of cash trapped in South Korea by the end of the year as sanctions stop it repatriating money from oil sales, Korean government sources with direct knowledge of the situation told Reuters on Wednesday. 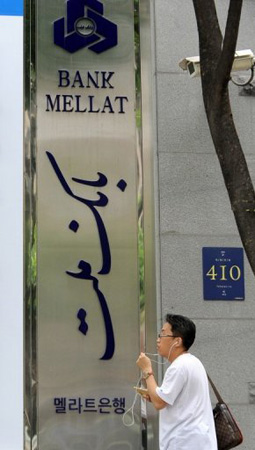 SEOUL (Reuters) – Iran could have nearly $5 billion of cash trapped in South Korea by the end of the year as sanctions stop it repatriating money from oil sales, Korean government sources with direct knowledge of the situation told Reuters on Wednesday.

Sanctions do not penalize non-U.S. refiners from buying Iranian crude, but they make it hard for foreign banks to pay the Islamic Republic the hard currency that makes up around 50 percent of government revenue. Just this week, Indian refiners began paying around $5 billion of oil debts after struggling for seven months to find a way to get money to Tehran.

Washington wants to isolate Tehran over its nuclear program, which it believes Iran is using to develop weapons. Tehran says it needs nuclear power.

South Korea is one of Iran’s top crude buyers, importing around 230,000 barrels per day on average, based on total imports in the first half of the year. Its refiners are paying Iran for oil into bank accounts in South Korea.

The trapped cash pile has already reached up to 4 trillion won ($3.82 billion), according to one of the sources, who could not be named due to the sensitivity of the issue. That could reach 5 trillion won ($4.76 billion) by the end of the year, the source added.

Iran can use the won funds to buy goods from South Korea but runs a trade surplus with Asia’s fourth-largest economy amounting to around $400 million a month, according to official Korean data. South Korea has almost no natural resources so is heavily dependent on oil imports.

A source at the South Korean central bank confirmed that Iran cannot repatriate the funds due to international sanctions but declined to confirm the amount.

“Iran’s central bank keeps that money it has received from Korean buyers, including oil refiners, hoping that it can bring out the money later when sanctions are lifted,” the source at the Bank of Korea said by telephone.

“Iran’s central bank can not transfer won funds out of South Korea even if we exchanged the money into other currencies because international banks would not handle the transfer under the sanctions,” the source said.

Iran’s central bank has the won accounts at Industrial Bank of Korea and Woori Bank, both owned by the Korean government.

South Korea, the world’s fifth-largest crude oil importer, bought about 9 percent of its total crude imports of 2.54 million bpd from Iran in the first half of the year, data from state-run Korea National Oil Corp showed.

South Korea boosted imports of crude by some 9 percent in the first half of this year as refiners produced more fuel to plug a shortfall in supply of oil products in the region after a quake and tsunami hit Japan in March.

Despite the hollow promises of the Iran regime’s officials...