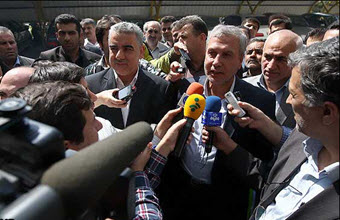 According to the state-run Mizan news agency, on Tuesday, 14 June, Rouhani’s Minister of Labour stressed that the government no longer has the necessary resources for investment, and by creating thousands of dams and various construction plans, the crises of the society, including water crisis and unemployment, will not be solved.

Rabiee reiterated that infrastructure development has not led to an increase in wealth and reduction of poverty, and the development of education could not cure income poverty. According to this state official, in some areas the proportion of employed graduates does not even exceed 4 per cent. Rabiee said labor force in Iran is “strongly unstoppable” and deprived of the necessary standards. He said training the skilled workforce is necessary for economic growth and stressed on the need to revise the country’s entire educational system.

Addressing lawmakers, Rabiee said that the report by the Parliament’s Research Center acknowledges that economic growth has nothing to do with construction and direct investments by the government, but on the contrary, what facilitates the economic growth is the private sector and foreign investment. However, the minister admitted that because of constraints in attracting foreign investment, the prospects for solving the problem of unemployment in the country is unknown.

He then stressed that economic growth alone does not lead to job creation and justice and one cannot use a single prescription to encourage the development of industries and the economy in Iran.

In another part of his speech, Rabiee pointed out the lack of retirement and social security funds which according to him cover 80 million people living in the country. He said: “Total deficit in retirement and insurance funds by the end of 2015 amounted to about 36,000 billion Tomans.”

However, by his own admission, the Labor Minister acknowledged that the funds suffer from a higher deficit and require more funding which is not approved in the annual budget.

“The huge deficit is due to the fact that Pension funds companies are actually in recession. In addition, the government’s debt to pension funds amounts to 60,000 billion Tomans,” he said.

West ‘did not want Annan to succeed’: Iran

AFP: The West, especially the United States, is to...