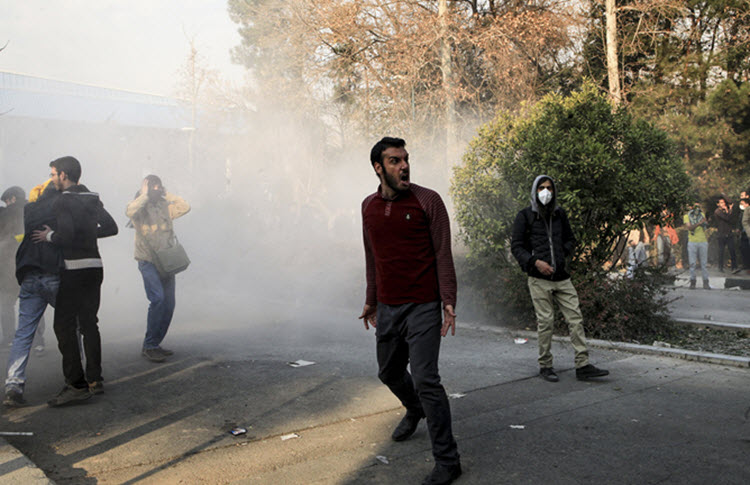 London, 2 August – The Iranian currency fell to a record low on Monday, just one week before the US begins re-imposing sanctions on Iran , which has sparked fears of prolonged economic turbulence and increased civil unrest.

As the market closed on Monday night, Iran’s rial was trading at 122,000 to the US dollar, which constitutes a rapid drop from Saturday when it was trading at 98,000. Many Iranians are already seeing their savings dwindle due to the failing economy and are rushing to buy hard currencies (US dollar/British pound) or gold, which are better able to retain value.

Protests, which have been a common feature in Iran since December, broke out last month when the rial plunged to 90,000 to the dollar and security forces cracked down violently on protesters.

So how have Iran reacted? Well, rather than address the rampant corruption that caused the problem, the mullahs have blamed their enemies and artificially fixed the exchange rate at 44,000 rials to the dollar. Over 20 money traders were arrested and threatened with the death penalty for doing business at the global rate, back in April.

The US pulled out of the 2015 nuclear deal in May and vowed to reimpose sanctions unless Iran changes its policies of regional aggression and funding terrorism. Donald Trump has even said that he is willing to talk with Iran, but the mullahs have rejected that.

The first lot of US sanctions will return on August 6, while the rest will come into place on November 4. The US has already begun revoking the licenses for American firms operating in Iran and warning foreign companies that they will face secondary sanctions (including being cut off from the US banking system) if they stay in Iran. They have also warned other countries, like China and South Korea, to stop buying Iranian oil or face the same sanctions.

This is all part of Trump’s plan to bring Iran back to the negotiating table in order to create a better Iran deal that focuses on all of Iran’s malign behaviour.

The Iranian uprising, which began over a draft budget that would cut subsidies for the poor in order to fund the military, has now become about all of the problems faced by Iranians, which all have the same root cause: Iran.

The mullahs tried to extinguish the flames by killing 50 protesters and arresting over 8,000, but this had the opposite effect. The people are united in calling for the mullahs to go.

Chavez: Venezuela will always back Syria, Iran against US ‘madmen’

By Jubin Katiraie The United States imposed new sanctions on 13...