Iranian People Blame Khamenei, Not U.S., for the Economic Disaster 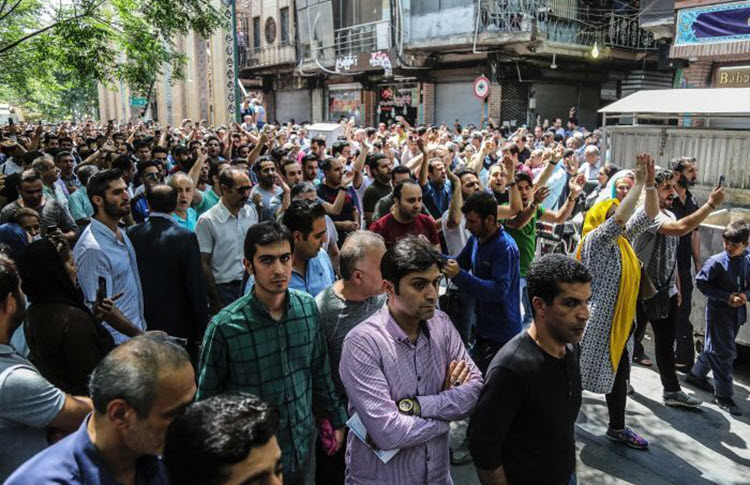 London, 14 August – In remarks that were broadcast by state television, spokesperson for the Iranian judiciary, Gholamhossein Mohseni Ejei discussed the dozens of arrests for financial crimes that occurred recently. “Sixty-seven suspects have been arrested, some of whom were released on bail, and more than 100 people including government employees and officials, as well as private employees and others have been given travel bans,” Ejei said.

In response to a proposal by the Islamic Republic’s Judiciary Sadegh Amoli Larijani to create new Islamic revolutionary courts that will impose maximum sentences on those “disrupting and corrupting the economy”, Supreme Leader Ali Khamenei, was quoted by the media as saying that those accused of economic corruption must be punished “swiftly and justly.”

Iran’s Judiciary request further asks for the courts to be eligible to try all suspects, including “official and military” people. The punishments issued by these courts may include the capital penalty.

Friday prayer Imams in Iran also condemned corruption and demanded punishment. In Qom, Iran’s religious capital and the power base of the ruling elite, the Imam directly referenced the Aghazadehs, or “noble-born”, saying, “Some of these Aghazadehs have turned the people against the state and we need to confront them… the time for mere words to heal the economy is over. The Judiciary and related institutions need to counter the economically corrupt without discrimination.”

When US State secretary Mike Pompeo spoke to the Iranian-American community at the Reagan Library a few months ago, he pointed out some prominent examples of corruption in the Iranian officials. His list included the former IRGC officer and Minister of Interior Sadeq Mahsouli, Grand Ayatollah Makaram Shirazi, Ayatollah Khamenei, who he claimed has an off-the-books hedge fund called the Setad worth a $95 billion, and Iran’s head of Judiciary Sadeq Larijani, who he said is worth at least $300 million. “The Iranian economy is going great – but only if you’re a politically-connected member of the elite,” Pompeo added.

The Telegraph ran a joint article by Josie Ensor and Ahmed Vahdat, who report that the Iranian people blame Khamenei, not Trump, for the economic disaster. This seems to be the case, for a few different reasons.

Iran’s population has a majority of young, educated people who have access to the internet and satellite TV channels, even though satellite receivers are illegal, and many websites are blocked. Images and videos of the exploits of “The Aghazadehs” flood Iranian social media. Their luxury cars and villas, and their lavish parties are a harsh contrast to the lives of ordinary Iranians, who struggle to feed their families.

And, while Iranian President Hassan Rouhani promised economic prosperity, a stable currency, a fight against corruption, better relations with the international community, and more, he hasn’t kept his promises.

Since the benefits that came from the Iran nuclear deal didn’t affect the economy for the ordinary Iranian, no one blamed Trump’s exit from it, or the sanctions that followed, for the downward spiral of Iran’s currency, the rial.

These days, the Iranian people’s main concern is how...