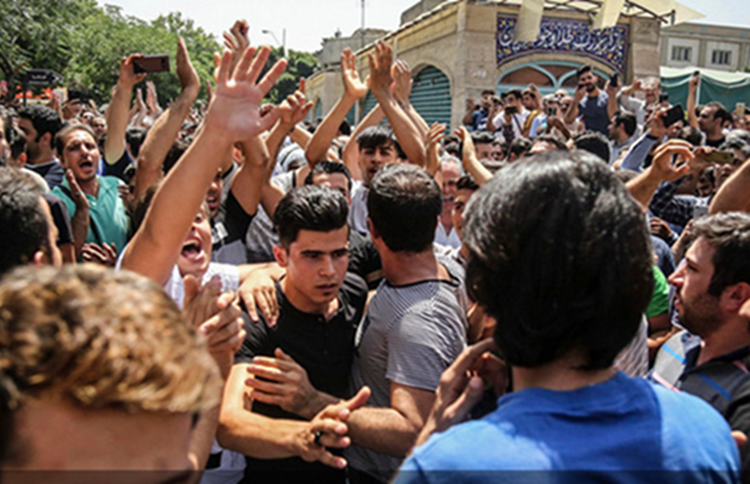 London, 18 Dec – The Iranian economy will face more crises in 2019, despite Government efforts to paint a rosy picture and what seems on the surface to be a slightly strengthening currency, according to calculations from economy expert Hossein Raqfar.

Raqfar said: “Our equations show Iran’s economy will go bankrupt even with the U.S. dollar trading at 80,000 rials. Huge expenses will be placed on the shoulders of the country’s production lines and families will lose their purchasing powers at unprecedented scales. If rates remain above the 80,000 rial mark, the situation will be even worse.”

While the current global exchange rate is 105,000 rials to the US dollar, many more economic experts are saying that even if rates rise to the Government’s artificially fixed exchange rate of 42,000 rials, Iran should still expect a widespread recession. This would mean the closure of factories, a surge in unemployment, and ultimately more anti-government protests in the streets, like the kind that have been happening all year.

These brave protesters recognise that the Iranian government’s corruption and mismanagement over the past 40 years are the main force behind the country’s economic woes, even while the Government and their apologists abroad claim that sanctions are causing the crisis.

The Government has to fix the exchange rate in April in order to compensate for an economic crisis caused by the budget deficit and shortfalls in Iran’s banking system, which are still yet to be addressed. This has caused the government’s experts to predict inflation rates of over 100%, but economic experts outside of Iran are warning that has already been surpassed.

Professor Steve Hanke of Johns Hopkins University said that Iran’s actual inflation rate is currently 170.5%, which explains the dramatic price hikes in government goods and services. In fact, this means that the Government profited from the crisis.

Meanwhile, Iran is witnessing the mass-closure of bank branches and the propping up of the banking system as a whole by stealing money from Iranian people. But this crisis could well halt production as banks are charging 33% on loans to production units, and lead to the collapse of the economy, all while the Government looks away.

Human rights activist Heshmat Alavi wrote: “For the ruling government in Iran this is a recipe for disaster, reminding Tehran about the very sparks fuelling the late December 2017 uprising. As we speak, the Iranian government is going the distance to save the banking system by further plundering the Iranian people. The people will eventually reach their threshold and this government, weakened by powerful sanctions and escalating isolation, no longer has the capacity to confront the protesting Iranian people.”

AFP: An Iranian operating a news website from the...