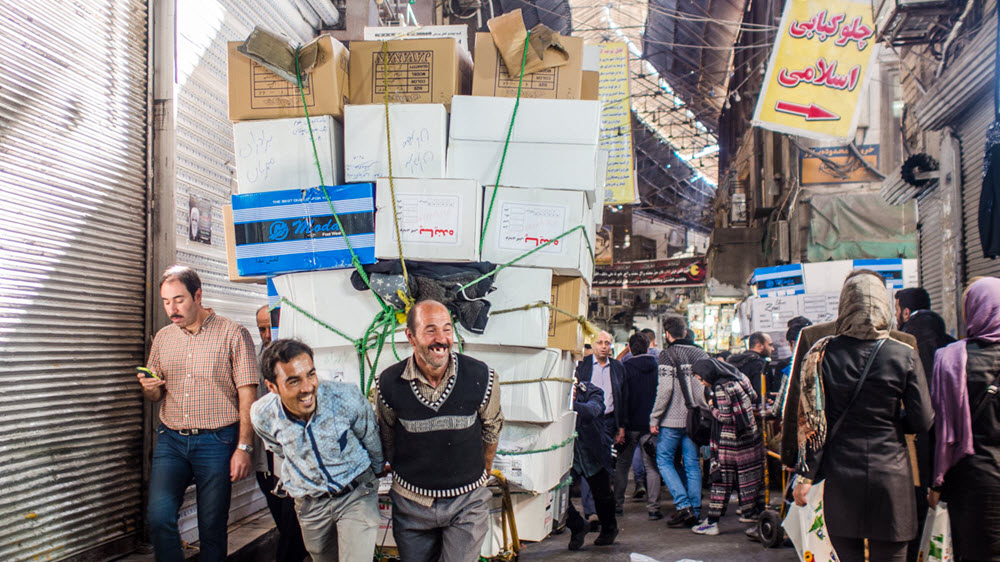 Re-imposed US sanctions are crashing Iran’s economy, and the people of Iran are struggling to afford basic goods. More unrest is expected. In fact, as Iran’s rial collapsed, vendors of the thousands of shops in Tehran’s sprawling Grand Bazaar, — traditionally a gauge of the national mood — have spoken out against the government, internal politics, and corruption.

Iran’s lower and middle classes make up the majority of the population. Their discontent highlights the dangers ahead for the government of President Hassan Rouhani. Many expect this year to be worse than last as protests over the economy continue.

Twenty-six-year-old Kiana Ismaili, spoke with AP as she shopped at the bazaar before her wedding. “It has become more difficult, but we need to lower our expectations,” she said.

Historically, Iran’s Grand Bazaar has been the center of its economic and political life. There are Western-style mega-malls in Tehran’s northern suburbs, but the Bazaar still draws huge crowds. As well, Iran’s bazaar serves as political indicator.

Protesters swarmed Tehran’s Grand Bazaar and forced shopkeepers to close their stalls in June, when despite government attempts to control the currency rate, the rial dropped to 90,000 to the U.S. dollar on the black market.

The rial continues to spiral, with many anticipating further drops after U.S. sanctions on Iran’s oil industry went into effect in early November. While the Trump administration denies that it is attempting to overthrow Iran’s government through the economic pressure, Iranian officials say the link is clear.

Meanwhile, at the Grand Bazaar, people are buying what they can before their savings dwindle away.

Omid Farhadi, a 25-year-old sales clerk at a shop in the Bazaar said, “You have no price stability in this country. You go to bed and overnight a car that was worth 100 million rials is now worth 140 million.” According to Farhadi, young Iranians with the financial means want to leave the country. He blames Iran’s poor relations with the rest of the world for the faltering economy.

Iran’s financial problems began when President Trump announced US exit from the 2015 Iran nuclear deal, under which Iran agreed to limit its enrichment of uranium in exchange for the lifting of economic sanctions. Although the United Nations has repeatedly confirmed that Iran complies with the accord, Trump wants a stricter deal that includes Iran’s ballistic missile program, its foreign policy, and he wants to permanently limit Iran’s atomic program.

Many Iranians are angry at Trump for pulling out of the deal, but many are angry at their own government over several corruption cases and allegations of mismanagement by officials. Rouhani’s administration is the target of much resentment.

Salesman Alireza Alihosseini said, “Ninety percent of our problems are because of the infighting.” He added, “I don’t know why but the government and the supreme leader have differences. Only 10 to 5 percent is because of America.”

Syria is also a sore point for young unemployed Iranians. One man said, “This is the people’s money. We have done nothing wrong to deserve this, but they are sending all our money to Syria.”

Iran indicates it has no plans to halt enrichment

AP: Iran indicated Saturday that it has no plans...

Reuters: European Union leaders will push ahead with plans...