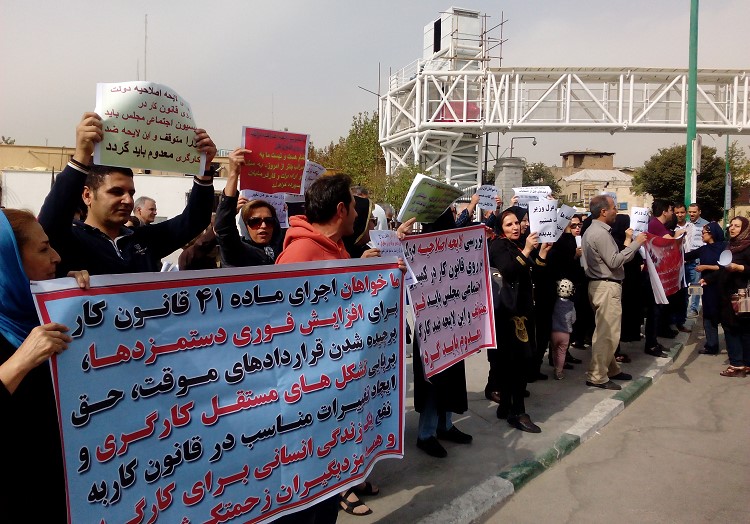 He added, “Unfortunately, 70 percent of the society is below the poverty line. In this respect, breadwinning concerns affect all family members.”

Iranian families must simultaneously scramble to deal with growing inflation and high prices, doubling the pressure on breadwinners who are sometimes deprived of receiving their salaries for months. Additionally, given the significant number of female workers and employees, many women are victims of poverty and its consequences.

“Regarding the 60-percent increase in women’s employment in the past five years, the women are the first victims of intense inflation,” Mahboub-Far said.

However, many citizens suffered from poverty, misery, and unemployment even before the coronavirus outbreak emerged in Iran. In this context, social disasters like child labor, vast addiction among women and children, prostitution, suicide among youths, and millions of homeless who spend their lives in graves were the direct outcome of poverty.

Now, as the poverty line shifts again, society will certainly experience the amplification of the mentioned phenomena. In such circumstances, the state Supreme Labor Council practically betrayed the workers despite its name. In this respect, the council approved 1.835 million tomans [$111] the minimum workers’ wage.

This approval was announced when Iranian families were hit by the coronavirus and its economic results. On the other hand, the government recently raised the price of bread in different provinces, adding salt to needy people’s injuries.

Notably, in recent weeks, the Iranian government left a terrible record in fighting the coronavirus in opposite to claims of the supreme leader Ali Khamenei.

On the one hand, authorities recommended citizens to stay their homes, while on the other, they did not provide basic supplies despite the huge wealth of financial institutions and companies affiliated with Khamenei or the state. The government also led needy people to make the tough decision between dying of starvation or the coronavirus while leaving them without substantial support.

Finally, the government resumed economic activities while the country had yet to pass the disease peak according to physicians. In this respect, contrary to President Hassan Rouhani’s remarks about crossing the peak of the virus, Health Ministry officials affirmed that the country has not reached its peak.

However, since authorities are averse to spend the country’s national resources on serving citizens rather than wasting on costly aggression, the government sent the people back to contaminated workplaces in mid-April. The decision resulted in returning the disease in several areas like Khuzestan province in southwestern the country while the governor Gholamreza Shariaty announced, “The cities of Bavey, Howeizeh, Ahvaz, Hamidiyeh, Handijan, Dezful, Shushtar, Karun and Masjid Soleiman are red cities and will be quarantined until the end of the week.”

In recent days, many workers and employees have protested their horrible work conditions and demanded their arrears. It is worth noting that the protests’ dimension has extended to the state-linked employees in several cases. For instance, on May 10, employees of the Edalat stock bureaus held a gathering in front of the Economy and Finance Ministry in Tehran.

Wage and insurance of employees of 353 offices of the Edalat across the country have been delayed since 2018 despite their 14-year work experience.

Also, employees of the state broadcasting organization (IRIB) held a gathering inside the facility. These people were responsible for 41 years of systematic secrecy and censorship. However, officials’ mismanagement, nepotism, and corruption prompted them to protest their unfair work conditions.

AFP: Iran proved to be the sole flashpoint in...