The Disappearance of Iran’s Middle Class, Its Assimilation Into the Lower Classes 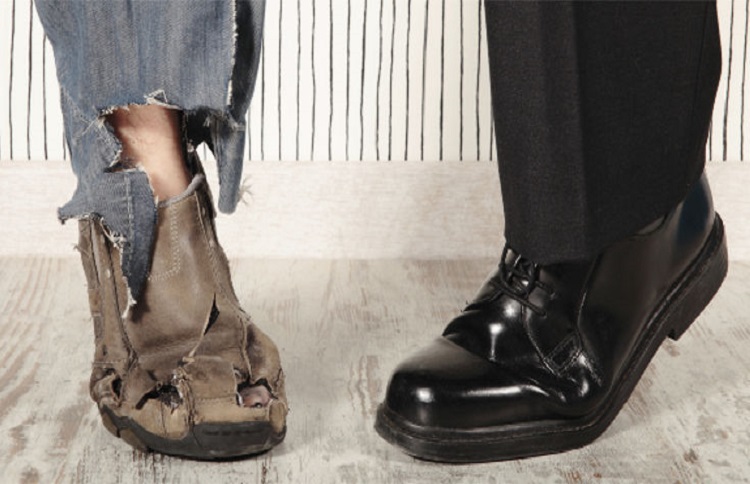 In conventional sociology, the middle class is said to be the engine of progress and development.

One of the most effective measures of the Iranian government in dealing with this class is to weaken and discredit this section of the people, so much that, according to government experts, the government’s actions on this class is going so far that is leading to its complete disappearance from Iran’s society.

The social experts said that this part of the society is moving from its traditional place which is the middle stage of the society to the lower classes. This situation can be seen in the income distribution index between economic groups.

The state-run Hamdeli daily on 30 December 2019 wrote: “Revenue distribution in the deciles of the society has changed compared to recent decades. In other words, we used to have two weak deciles, six medium deciles, and two rich deciles in society. But now these conditions have changed and two poor deciles have expanded and become four deciles, and on the other hand, six middle deciles have been reduced to six deciles, and that is when their income is halved, and the two high-income deciles remain in place.”

Iran’s President Hassan Rouhani, at the start of his presidency, to push back his rivals, said:

“We all have to move. We all must fasten our belts, with poetry and slogan you cannot make independence, with slogan there cannot be an honor, with outcry and demagogue the greatness of the country will not be right… In this country, some people, in the name of fighting against the (global) powers and the superpowers, have robbed the people’s pockets.” (State Television News Channel, 13 May 2104)

But today there is no more trace of Rouhani’s slogans and promises like the above, and he and his government have lost the fight on power in the last parliament election against Iran’s supreme leader and his faction, both political and military branches which is the IRGC, which now in addition to having “the gun, the media and the money” (a phrase from Rouhani’s speeches) now, they have captured the Judiciary and the legislature, which is a clear defeat for Rouhani.

Because of the regime’s successive failures in the foreign policy arena, including the JCPOA, the expansion of the sanctions, the unprecedented global isolation, and the coronavirus epidemy, it is clear as the daylight, that there will be no more any middle class and it will slip to the lower classes, which has a devastating effect on the Iranian society, and inevitably this will add to the number of the child labors, garbage collectors, unemployed youth and the poverty-related suicides.

A government expert with a Gini coefficient index cited by international economic centers shows that when this coefficient reaches 40, the life of the middle class is over and said:

“Citizens’ purchasing power has declined sharply, to 40 percent in the last decade, compared to the last two or three decades. When this purchasing power decreases, the poverty line and the Gini coefficient naturally increase, and when this coefficient reaches 40%, it naturally means that the middle class has disappeared and descended to the lower class.” (State-run ILNA news agency, 18 June 2020)

Mohammad Bagher Qalibaf, Parliament’s Speaker, said in his election campaign that 4% of the population is prosperous and 96% live in poverty and inequality.

Gholamhossein Shafei, head of Iran’s Chamber of Commerce, warned of the break-up of the middle class, saying: “According to the Research Center of the Islamic Parliament of Iran, the Gini coefficient has been on an upward trend since 2013, which means a significant increase in inequality and social gap. According to these statistics, despite the increase in purchasing power, the country’s middle class is disintegrating.” (State-run Alef website, 7 June 2020)

But the Iranian government, which does not have any solution for this crisis, conducts shows like the distribution of food and advertising for it, increases the number of subsidies and the release of the justice share for sale by its owners and deferment of debts and bank installments. Such actions are in the hope of calming down the turbulent situation in Iran and to prevent that the country’s different classes from uniting against the authorities, which will be definitely the end of an era.

Ali Sarzaim, the deputy Minister of Economic Affairs and Planning of the Ministry of Cooperatives, Labor and Social Welfare, said on this plan:

However, now there are clear signs about the bad situation and that this government cannot and will not change anything while it is in deep trouble and involved with global terror support, its nuclear projects, so not having the intended sources to finance the people. As the state-run daily Marshregh wrote on 10 June 2020:

“The Majlis (Iran’s Parliament) Research Center shows that last year, the country’s per capita income fell to its lowest level and reached 4,870,000 tomans.”

By Jubin Katiraie In early November, a 5.9 magnitude...