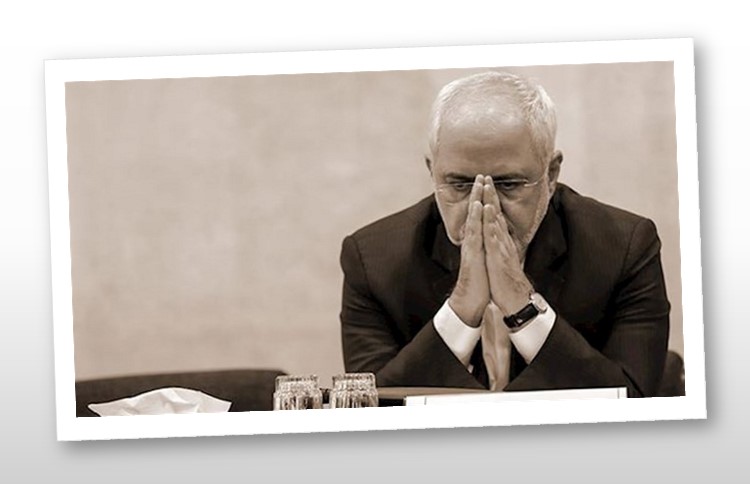 Following the expression of concern on 15 June by the Director-General of the United Nations nuclear watchdog over Iran’s recent nuclear activities,

and the reaction of the troika European countries and the US, Iran’s Foreign Minister’s Javad Zarif’s remarks and threats may reflect Tehran’s concerns on the upcoming events around its nuclear case.

On Monday, June 17, Rafael Grossi; Director-General of the International Atomic Energy Agency (IAEA), expressed that Iran has not answered their questions about undeclared nuclear materials and activities for more than a year at the opening speech of the summit of the Board of Governors. He added that more than four-month Tehran has been preventing the IAEA inspectors to inspect two specified places, and for more than one year, Iran has not participated in any content review to answer their questions about undeclared nuclear materials and activities.

This has had a negative impact on the IAEA’s ability to resolve issues and provide the necessary assurances about the absence of undeclared nuclear materials and activities Grossi added.

Following the comments of Rafael Grossi, the E3, during the draft resolution prepared by the Board of Governors, called for the cooperation of Iran with the IAEA.

E3 countries have asked Tehran to allow inspectors to inspect two nuclear facilities. This was the agency’s first diplomatic reprimand to Tehran.

In addition, the European Union issued a statement on 16 June, following a report by the IAEA, alleging violations of Iran’s obligations, including enrichment on the Fordow site, and expressed deep concern.

The EU has also expressed concern over the increase in the enriched uranium reserves of the regime, which has exceeded the allowable level in the UN Security Council and now reaches 1571.6 kg.

Based on the JCPOA, Iran is allowed to have a ceiling of 202 kg of uranium with a concentration of 3.7%.

But under the pretext of the US withdrawal from the nuclear deal and the return of Washington’s sanctions against Tehran, Iran has continued to increase its nuclear ambitions and reduce its nuclear commitments.

In the statement issued on Tuesday, the EU criticized Iran’s policy, stressing that Tehran must return to the UN Security Council and fulfill all its obligations without delay.

Following the concerns of the European Troika and the EU statement, the White House National Security Council immediately tweeted:

The U.S. supports @rafaelgrossi’s call on #Iran to cooperate immediately and fully with the IAEA. The world must come together to stop the #Iranian regime’s blatant disregard of @iaeaorg. No other country has ever denied access to a formal request under the Additional Protocol. https://t.co/shuOrrth5N

The harsh tone, the sheer volume of concerns, and the positions of the Western countries aroused the fear of Iran’s government. But Tehran, which does not want to reveal its true feelings for Western countries, enters the field with the tactic of threat.

A tactic that now has a clear message for all international observers when Tehran does it, is obviously afraid.

“We will not allow the International Atomic Energy Agency (IAEA) to be a tool for the United States to destroy the JCPOA,” Zarif told at a joint news conference with the Russian foreign minister on 16 June.

While the IAEA, the European Troika, the EU and the US have made clear Iran’s breaches of the JCPOA, Zarif claimed that Iran’s nuclear program is in “full transparency,” which is nothing more than a big lie, analysts believe. Tehran wants both the benefits of the JCPOA and its non-compliance. And its tactic to achieve it is its hollow threat.

Perhaps the remarks by Brian Hook, the US State Department’s special representative for Iran on 16 June best exposes Iran’s tactics. Hook said: “The Iranian regime’s threats are designed to intimidate nations into accepting Iran’s usual violent behavior for fear of something worse. We refuse to play by Iran’s rules.”

But since the regime’s ever-present winner has been exposed and cannot do much for the system, Hook adds, “We don’t accept to play at the Iranian table.”

Hook’s reaction was completed by U.S Secretary of State Mike Pompeo’s response on 16 June, while he tweeted: “The @IAEAorg has confirmed Iran is denying access to two of its past nuclear sites. This unprecedented obstruction is deeply concerning and unacceptable. The international community must demand that Iran cooperate immediately and fully with the IAEA.

Then, Zarif reiterated the threat posed by its spokesman for his ministry from a few days before and said: “If the International Atomic Energy Agency wants to use irrational methods, we will take appropriate action,”

“If the IAEA makes a non-constructive decision on Iran, it is possible that Iran will react, and they will guess what the decision will be,” said Abbas Mousavi, the spokesman for Iran’s foreign ministry days before.

Experience has shown that when Iran’s clerical establishment is confronted with a decisive policy by the international community, it retreats, even though it makes threats at first.

“America’s very dangerous move on the JCPOA either at the IAEA or at the United Nations Security Council,” and the “very worrying” keyword that came out of Zarif’s mouth show the regime’s extreme fear.

“The United States has begun threatening and hiring both the IAEA and the Security Council,” Rouhani said on 14 June. This fear stems from the current composition of the IAEA’s Board of Governors. Especially while the council’s vote will not be stopped by a veto.

In the Security Council, Russia and China have the right to veto as Tehran’s supporters, but the referral of Tehran’s nuclear program to the Security Council under Chapter VII of the UN Charter, which allows military action against the wrongdoer, is an option which is the main fear of the Iranian government.

Rouhani and Zarif were always happy after the JCPOA’s signing that “the JCPOA (Barjam in Farsi), no matter what its flaws and shortcomings, has removed the shadow of the war from the system and brought security to it.”

In addition, the activation of the trigger mechanism by the US or one of the European Troika countries, following Tehran’s numerous and gross violations of the UN Security Council, all UN sanctions could be reimposed on the government of Iran, and China and Russia have the right to veto.

The picture ahead: The referral of Iran’s nuclear case to the Security Council under Chapter VII of the UN Charter and the activation of the trigger mechanism and subsequent UN sanctions against the Tehran compels Zarif to threaten in the hope that the rivals step back.

Change in Iran Is Inevitable As Unrest Continues To Grow

Back in July, a three-day conference was held by...