Iran Focus: Tehran, May 14 – The following is the text of a statement released by Saeed Massouri, 45, a political prisoner currently on death row, on the execution of five Kurdish activists in Tehran’s Evin Prison on Sunday. 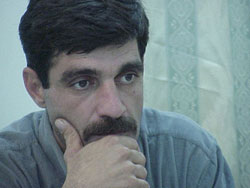 Tehran, May 14 – The following is the text of a statement released by Saeed Massouri, 45, a political prisoner currently on death row, on the execution of five Kurdish activists in Tehran’s Evin Prison on Sunday. Originally from Khorramabad, in Iran’s western province of Lorestan, he is currently incarcerated at Gohardasht Prison in Karaj, west of the Iranian capital.

“You can’t frighten us with decapitation”

In the midst of the country’s serious turmoil, I learnt of the execution of my late-found friends and acquaintances from prison with whom we spent years in the jail cells of Ward 209 [at Evin Prison].

Perhaps they [the regime] think that by executing them, they have managed to frighten us and our people. But shame on us if instead of being more motivated [to continue the struggle against the regime], the execution of our friends and countrymen and compatriots were to frighten us. Indeed, what is to be done at a time when people have no other fate but imprisonment, torture and execution simply for being human; and when this is the price to pay for the slightest attempt to be free and have humanity? Where do those who remain silent in the face of such crimes draw the line between being human or not?

Hitler ended up murdering and wounding hundreds of thousands of people before those who should have known better finally came to realize that he was not worthy of respect and that negotiating with him was futile. Should such a cost be incurred once again?

At any rate, for my own part, I want to be clear on the degree of fear that these executions really instilled in me: I declare that after the hanging of these five, I am more than ready to be the sixth one to kiss the hangman’s noose.

Long live their memory and that of all those whose blood runs through the veins of history.

Note:
Saeed Massouri, a medical student who studied in Sweden and Romania, was arrested in Iran in January 2001 and sentenced to death on the charge of being affiliated with the main opposition People’s Mojahedin Organisation of Iran (PMOI/MEK). On several occasions he was kept in solitary confinement for months at a time in Ward 209 of the notorious Evin Prison as well as in Gohardasht Prison in Karaj.

The five dissidents executed on Sunday were Shirin Alam-Houli, Ali Heydarian, Mehdi Islamian, Farzad Kamangar, and Farhad Vakili. They were hanged at Evin Prison after being charged with “acting against state security.”