Iran Focus: Tehran, Aug. 06 – Iranian political prisoner, Jaafar Kazemi, is at risk of execution at any time, according to Amnesty International. 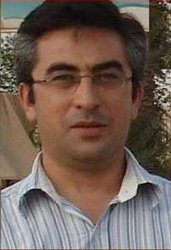 Tehran, Aug. 06 – Iranian political prisoner, Jaafar Kazemi, is at risk of execution at any time, according to Amnesty International.

Iran’s Supreme Court has rejected Kazemi’s request to appeal against his death sentence, the human rights group announced on its website on Friday.

The sentence was imposed for his alleged participation in anti-government demonstrations following last summer’s disputed Presidential election and his links with the main opposition group People’s Mojahedin Organisation of Iran.

Kazemi, a 47-year-old lithographer, was arrested on 18 September 2009 and transferred to Tehran’s Evin Prison, charged with “moharebeh”, or waging war on God. He is reported to have been interrogated by security forces for months, and was pressured to make a televised “confession”, which he refused to do, Amnesty said. “One of his sons is a PMOI member and lives in Camp Ashraf, which houses PMOI members in Iraq. On 1 August, his wife, Roudabeh visited the Judiciary’s office in order to deliver a letter. They refused to accept it and informed her that the death sentence would be carried out”.

His lawyer Nasim Qanavi said last month that her client had previously spent 10 years in Iranian prisons in the 1980s for supporting the PMOI.

The opposition National Council of Resistance of Iran, the coalition which includes the PMOI, last month urged UN Secretary General Ban Ki-moon and other UN officials to take “urgent measures” to save the lives of Kazemi and other political prisoners.

Opposition sources claim prison authorities in Evin have disconnected the phone in Ward 350 where Kazemi is being held.

Amnesty also highlighted the case of several other death row prisoners linked to the PMOI.

Javad Lari, a merchant in the Tehran bazaar, had been sentenced to “death, without pardon” for “enmity against God”, the group said. “He is also held in Evin prison, where he was reportedly tortured and forced to ‘confess’.”

Ali Saremi, 62, has a son in the PMOI who lives in Camp Ashraf, Iraq, whom he has visited. Ali Saremi has spent 23 years in prison for his political activities both before and after the 1979 Islamic Revolution in Iran.

Reuters: The head of the Iranian nuclear program said...