US imposes sanctions on Iranian officials for ‘abuses’

BBC: US President Barack Obama has ordered the imposition of sanctions on eight senior Iranian officials for “sustained and severe violations of human rights”. 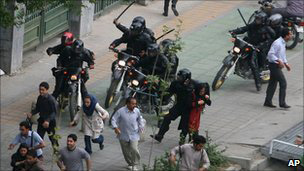 US President Barack Obama has ordered the imposition of sanctions on eight senior Iranian officials for “sustained and severe violations of human rights”.

The treasury department said they would face a travel ban and asset freeze.

They include the head of the Revolutionary Guards, a former interior minister and the prosecutor-general.

The alleged abuses include the killings and beatings of anti-government protesters after the disputed presidential election in June 2009.

“As the president noted in his recent address to the United Nations General Assembly, human rights are a matter of moral and pragmatic necessity for the United States,” the White House said in a statement.

“The United States will always stand with those in Iran who aspire to have their voices heard. We will be a voice for those aspirations that are universal, and we continue to call upon the Iranian government to respect the rights of its people.”

The individuals targeted by the sanctions are:

The White House statement added: “This order provides the United States with new tools to target human rights abuses engaged in by officials of the government of Iran.”

Deutsche Welle: In efforts to tighten sanctions against Iran,...

Film of police brutality in Iran