AFP: The UN General Assembly on Tuesday approved a resolution expressing “deep concern” over “recurring” human rights violations in Iran, where authorities have been targeting rights lawyers in their ongoing crackdown on dissent. 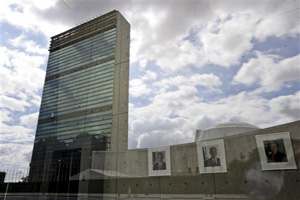 UNITED NATIONS, December 22, 2010 (AFP) – The UN General Assembly on Tuesday approved a resolution expressing “deep concern” over “recurring” human rights violations in Iran, where authorities have been targeting rights lawyers in their ongoing crackdown on dissent.

The resolution, approved 78-45 with 59 abstentions, follows a December 13 letter from more than 80 leading world figures urging Iran to free Sakineh Mohammadi Ashtiani, the woman sentenced to death by stoning in a case that has attracted global attention.

The General Assembly “expresses deep concern at serious ongoing and recurring human rights violations” in Iran, such as “torture and cruel, inhuman or degrading treatment or punishment, including flogging and amputations.”

The Assembly also noted “the continuing high incidence and dramatic increase in the carrying out of the death penalty in the absence of international recognized safeguards, including public executions” by stoning and hanging.

The Assembly decried the used of capital punishment on people who were younger than 18 at the time of the crime.

The resolution noted the severe limitations on freedom of thought and freedom of religion in Iran. It criticized arbitrary arrests as well as the long prison sentences handed out for prisoners of conscience.

Dozens of senior reformist figures and journalists as well as protesters were rounded up in the aftermath of the June 2009 election, many of whom were put on trial on charges of seeking to overthrow the regime through what many Iranian officials called a “velvet coup.”

Other cases involve the reported death sentence handed down in early December to an Iranian-born Canadian resident for allegedly designing an adult website, and the arrest of two reporters for a German magazine in October who entered the country seeking to cover the stoning case.

Washington hailed Iran’s release of Iranian-American Reza Taghavi, jailed for nearly two years, on October 17, and called for the return of more prisoners including two US hikers arrested in July 2009 on Iran’s border with northern Iraq. The men will be tried on espionage charges in February. A third hiker who was arrested with them was released.

The Islamic republic is currently under US and UN sanctions over its refusal to suspend uranium enrichment. It rejects claims that its atomic program masks a bid to acquire nuclear weapons.

BBC: The IAEA decision to accept Iran's suspension of...