AFP: Iran coach Afshin Ghotbi said on Wednesday that he hopes to pilot his side to glory in the 2011 Asian Cup finals and what would be a first title in 35 years. 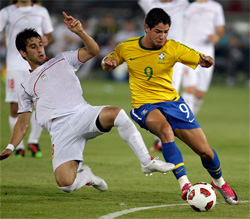 TEHRAN (AFP) — Iran coach Afshin Ghotbi said on Wednesday that he hopes to pilot his side to glory in the 2011 Asian Cup finals and what would be a first title in 35 years.

The draw in the Asian Cup 2011 to be played in Qatar from January 7 to 29 groups Iran, the Asian powerhouse from the late 1960s through the 1970s, with current Asian Cup champions Iraq, North Korea and the United Arab Emirates.

“We are there for victory, we are trekking on this path and we will act professionally. Our aim is the championship but I am not promising anything,” Ghotbi told a Tehran press conference, his last as coach of Team Melli.

“Now all Iranians have to keep the tempo in backing the team… it is their children playing for glory… to achieve the title after more than three decades,” he said.

Ghotbi, who will part with Team Melli after the Qatar finals, said that he has planned a 10-day training camp in the host nation, with whom Iran will play a pre-tournament friendly on December 28. A second has been pencilled in against Angola on January 2.

“I have assembled a team based on the players’ being football-smart, team-minded, and having an instinctive ambition for the title,” Ghotbi said, when asked why some recent caps had failed to make the squad.

However, both Javad Nekounam and Masoud Shojai of Spanish La Liga club Osasuna have made the shortlist.

Iran’s opening game in Qatar will be against holders Iraq on January 11.

Ghotbi said: “I cannot say that Iraq is the hardest game we face, but our people have to recall that even Spain lost its first match in the 2010 World Cup, so people have to keep on backing the team throughout the tournament.

“It is very important for us to make it to the knock-out round after playing the first two matches… The days are long gone when you knew who was going to win the championship before the finals had started.”

AFP: "Unilateral US sanctions against Syria and Iran are...