CNN: U.S. Secretary of State Hillary Clinton on Wednesday accused Iran of a repressive crackdown on protesters and political opponents in the past 10 days, including the killing of peaceful demonstrators by security forces. 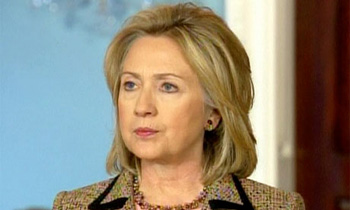 Washington (CNN) — U.S. Secretary of State Hillary Clinton on Wednesday accused Iran of a repressive crackdown on protesters and political opponents in the past 10 days, including the killing of peaceful demonstrators by security forces.

“Security forces have beaten, detained and — in at least three cases — killed peaceful protesters,” Clinton said in a statement. “Off the streets, the regime’s leaders have targeted human rights defenders and political activists, and authorities have recently rounded up ex-government officials and their families; former members of parliament; clerics and their children; student leaders and their professors; as well as journalists and bloggers.”

Clinton’s statement said the United States “remains deeply concerned by the persecution of Iranian citizens at the hand of their government,” and praised “the bravery of thousands of Iranians who once again took to the streets to exercise their fundamental rights” in the past 10 days.

Clinton noted an earlier announcement Wednesday in which the United States sanctioned two Iranian officials for human rights offenses that were reported after the hotly contested 2009 presidential election.

Prosecutor General Abbas Jafari Dolatabadi and Mohammad Reza Naqdi, the commander of Iran’s Basij paramilitary force, have been targeted by the U.S. Treasury and State Department for “being responsible for or complicit in serious human rights abuses,” according to a Treasury statement.

Dolatabadi is accused of indicting a large number of protesters, including individuals who participated in December 2009 marches on the holy day of Ashura, which descended into chaos and violence after security forces clashed with anti-government demonstrators. His office has charged protesters with being “mohareb,” or enemies of God — a violation that carries a death sentence.

Under Dolatabadi’s watch, reformists, human rights activists, journalists and others have been arrested as part of the broad crackdown on the opposition movement by the Iranian government, the statement said. Within the confines of Tehran’s notorious Evin prison, some detainees were abused and coerced into making false and self-incriminating statements, the statement said.

As commander of the Basij forces, the paramilitary force loyal to Iran’s hard-line leadership, Naqdi played a role in the violent response against protesters at the Ashura demonstrations, which resulted in as many as 15 deaths and hundreds of arrests, the statement said.

Naqdi was appointed to the head of the Basij in October 2009, just four months after the disputed elections that declared President Mahmoud Ahmadinejad the overwhelming winner.

In his former role as the Basij’s intelligence chief, the statement said, he was responsible “for interrogating those arrested during the post-election crackdown” and “extracted forced confessions from high-ranking reformist leaders that were broadcast on Iranian state-run television.”

At the time, Ahmadinejad downplayed the clashes during Ashura and likened the anti-government protests to “a theater play by the Zionists and the Americans.”

Ali Larijani, the speaker of Iran’s parliament, also dismissed concerns over the government-sanctioned crackdown over the protests that December, saying authorities should mete out “the harshest punishment” to protesters who disrupted Ashura observances.

US rejects prisoner swap with Iran

AFP: The United States on Wednesday dismissed the idea...