Britain will push for Iran sanctions at UN, says Hague 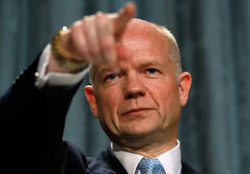 But in any case, the Islamic Republic would not be able to resist the popular pressure for reform sweeping the region, he predicted.

Hague promised to support a “strong resolution condemning abuses” at the UN meeting after accusing Tehran of being “completely unwilling” to address claims of oppression.

In a speech to a seminar organised by the Times newspaper on Tuesday, Hague said sanctions would be be lifted if Iran improved its rights record, but increased if it failed to do so.

In 2009, Britain and other Western countries condemned Tehran for crushing protests that followed the controversial re-election of President Mahmoud Ahmadinejad.

Iran denounced the Western condemnations as meddling in its internal affairs.

Dozens of people were killed in the opposition demonstrations protesting what they said was massive election fraud.

But Hague suggested that sooner or later, the tide would turn against the regime.

“2011 has shown that demands for human dignity are irrepressible. Iranians should take solace from this,” he said.

“The lessons of the Arab revolutions hold true for Iran just as they apply to repressive countries across the world,” continued Hague.

“Simply refusing to address legitimate grievances about human rights or attempting to stamp them out will fail.”

The Times organised Tuesday’s “Imprisoned in Iran” seminar to bring attention to the victims of oppression, including Sakineh Mohammadi Ashtiani, the woman sentenced to death by stoning.

Lawyer Mohammad Mostafaei, who was forced to leave Iran for having represented her, was one of the speakers.

HSBC to pay $1.9 bn to settle US claims: report

Syrian opposition chief under fire for talks with Assad allies

Reuters: Syria's opposition leader flew back to his Cairo...