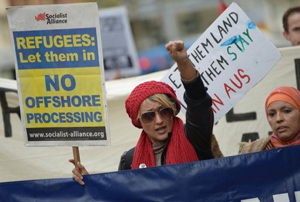 Prime Minister Kevin Rudd, who is trailing in the opinion polls to conservative rival Tony Abbott ahead of September 7 elections, has gambled his fortunes on a plan to send boatpeople to Papua New Guinea for processing and resettlement.

While it has slowed the flow of people-smuggling boats, nearly 3,000 asylum-seekers have arrived by sea since the so-called “PNG Solution” was announced on July 19.

Barely 300, all single men, have so far been transferred to the poverty-stricken Pacific nation.

“There is no doubt that it is having an impact,” Immigration Minister Tony Burke, who has previously cited widespread evidence from Indonesia that asylum-seekers were demanding their money back from people-smugglers, told ABC television.

“Week on week there has been a trajectory downward (in the number of people arriving in Australia by boat).”

But he admitted people-smugglers have recently put on “a surge”.

“In the last few days, some of the smuggling operations have tried to put together a bit of a surge and to see if they can overwhelm the current system,” he said.

More than 400 asylum-seekers aboard three boats have arrived since Sunday, while five people are presumed dead after another vessel foundered en route to Australia’s Indian Ocean territory of Christmas Island on Tuesday.

A major disaster was averted when Australian rescuers responded to the boat’s call for help and plucked 106 people to safety.

Burke said further evidence the policy was working was being seen by increasing numbers of people transferred to Manus Island on PNG asking to return home.

“They are overwhelmingly but not exclusively Iranian,” he told reporters, adding that the message was sinking in that no one would be settled in Australia.

“They’ve realised that coming by boat without a visa, after the announcement of the re-settlement arrangement, meant that they would not be settled in Australia and therefore the whole purpose of their original voyage turned out to be a waste of money and a waste of time.”

Burke has just returned from Jakarta where he and Foreign Minister Bob Carr took part in talks Tuesday aimed at finding a regional solution to the boatpeople issue.

Officials from major countries of origin, such as Afghanistan and Sri Lanka, were represented. But the summit was marred by Iran’s decision not to attend, a major blow as it is the biggest single source nation of asylum-seekers heading to Australia by boat.

Abbott has pledged his own crackdown that would see all refugees put on three-year temporary visas and forced into a work-for-welfare programme without rights to family reunion, appeal or permanent residency.

Though they come in relatively small numbers by global standards, refugees are a sensitive political issue in Australia and border security has featured prominently in election races since 2001.