Demonstrators near UN: Iran’s new president has blood on his hands

CBS: Thousands rallied near the United Nations Tuesday to protest Iran’s new president. As WCBS 880′s Alex Silverman reported, the demonstrators were joined by some high-profile politicians who said Rouhani’s recent talk of opening dialogue with the United States is merely a ruse. 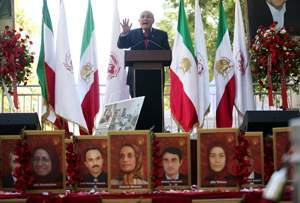 As WCBS 880′s Alex Silverman reported, the demonstrators waving their red, white and green Iranian flags were joined by some high-profile politicians who said Rouhani’s recent talk of opening dialogue with the United States is merely a ruse.

They say Iran has to show it’s moving away from trying to build a nuclear weapon before the United States opens any negotiations.
play

“If Obama thinks that he’s shaking the hands of a moderate, he’s actually shaking some bloody hands,” demonstrator Amir Emadi told Silverman. “Rouhani does not represent the Iranian people.”

He said his father was one of 52 people killed at a refugee camp in Iraq earlier this month at the behest of the Iranian president, Emadi said.

“These martyrs were murdered,” shouted former Rep. Patrick Kennedy. “Because they dared to dream of an Iran that had a democracy.”

Some have praised Rouhani for his more moderate views that his predecessor Mahmoud Ahmadinejad.

Part of Rouhani’s campaign was a pledge that he would work toward reducing tension between Iran and the West over the country’s nuclear program, tension that has led to crippling sanctions placed on the nation. Iran has refused to shut down its uranium enrichment program, saying it’s merely interested in energy and medical purposes. The West has cast a suspicious eye on the program, fearing that it could ultimately lead to Iran having nuclear weapon capability.

Since taking office, Rouhani has urged the West to roll back some of the sanctions in order for negotiations to move forward.

But those at the rally said Iran’s leader had to take some actions to prove the leadership’s sincerity, not just demand sanctions be lifted, and that Iran had made empty gestures about negotiations in the past.

“If we’re going to approach these negotiations with maturity and realism, we must recognize that the Iranian regime has taken us down this road before, and they fooled us before,” Giuliani said. “If we let them fool us again, then we are fools.”

On Tuesday afternoon, U.S. officials said Rouhani and President Barack Obama will not meet while in New York for the UN General Assembly.

No U.S. and Iranian leaders have sat down together in 36 years.

“The UN and the U.S. have turned their backs on murder,” Giuliani said. “This must stop.”

“Before he considers shaking hands with this man, how much blood is on his hands?” Giuliani added.

He called Rouhani not a moderate but a mass-murderer whom America cannot trust, Silverman reported.

President Obama addressed the assembly Tuesday morning. He said Rouhani’s words would have to be matched with actions.

President Obama said he’s tasked Secretary of State John Kerry with pursuing the prospect of a nuclear agreement with Iran. Kerry, along with representatives from five other world powers, is to meet Thursday with Iran’s new foreign minister, Mohammad Javad Zarif.

If Kerry and Zarif hold one-on-one talks on the sidelines of that meeting, it would mark the first direct engagement in six years between a U.S. secretary of state and an Iranian foreign minister.

AFP: Iran accused the United States and its European...