US pastor home after being deported from Iran

AFP: A Christian US pastor arrived home Wednesday after being deported from Iran for staging a protest outside a Tehran prison, denouncing what he called the “belligerent” Islamic regime. 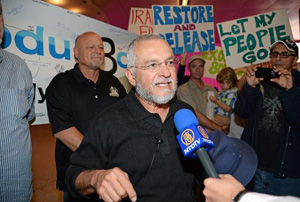 Los Angeles (AFP) — A Christian US pastor arrived home Wednesday after being deported from Iran for staging a protest outside a Tehran prison, denouncing what he called the “belligerent” Islamic regime.

Pastor Eddie Romero, from southern California, was arrested Monday and held for over 24 hours in the Iranian capital before being put on a plane out of the country.

Romero said he was treated well after being arrested.

“We had long good discussions. The primary interrogator spoke very good English. We really had a serious, serious discussion,” he told reporters at Los Angeles airport.

“To me it was just a wonderful time together,” he said.

Romero protested outside Tehran’s Evin prison, calling for the release of five inmates who he said were prisoners of faith and conscience, including an Iranian Christian pastor and a prominent human rights lawyer.

“We have to do things outside the box,” he told supporters and journalists gathered at Los Angeles airport.

Romero managed to livestream about five minutes of his protest, before being arrested and taken into the prison for questioning, according to organizers, who said he was detained for 32 hours.

He had been traveling with a tour group but left it three days before the protest, and went into hiding. Reports suggested he stayed at the Swiss embassy in Tehran, but this was not immediately clear.

“I’m a little bit unkempt right now, only because I have spent four nights on the streets of Tehran as a homeless person,” he told reporters.

“At least that’s what I appeared to be, until I was able to go to the gates of the prison and raise my protest, and then be taken in,” he added.

Explaining why he did it, he said: “It is for freedom that Jesus Christ has set us free, not for bondage, not for tyranny. It’s important for the church to understand that, and to work in many ways outside the box.”

“It’s enough for a belligerent government to try to stop people to have a good conscience and freedom of faith .. I’m just thankful to the Lord for the journey that we’ve been able to have here.”