Evening Standard: Seven London women have been on hunger strike for nearly 10 weeks near the US embassy in protest at violence in Iraq. They began the fast in September after 52 exiled Iranians were killed in a raid by Iraqi security forces.
Evening Standard 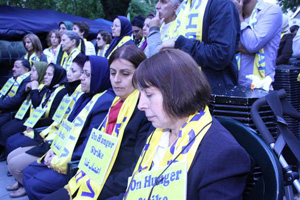 Seven London women have been on hunger strike for nearly 10 weeks near the US embassy in protest at violence in Iraq.

They began the fast in September after 52 exiled Iranians were killed in a raid by Iraqi security forces.

The women plus one man say they will continue to refuse meals unless the United States gives protection to remaining occupants of Camp Ashraf, a desert settlement formed by Iranians opposed to their country’s rulers.

Spokeswoman Laila Jazayeri said they were ordinary women who wanted to highlight the attacks on the camp. She said their health was deteriorating although they have been eating sugar lumps and drinking water.

“Their condition is really poor,” said Ms Jazayeri, director of the Association of Anglo-Iranian Women in the UK. “Some keep fainting and have stomach problems and a lot of pain. Some are suffering from pain in their whole skeleton.

“They say that if they have to lose their lives, they will.”

Conservative MP Mike Freer has visited the women, who include residents of his Finchley & Golders Green constituency. He said: “The hunger strikers outside the US embassy are taking a brave stand to raise the profile of what’s happening in Camp Ashraf and Camp Liberty. Inevitably, the hunger strike is affecting their health which is a cause for concern.”

The Foreign Office condemned “utterly” the attack on Camp Ashraf, carried out on September 1. Former Commons Speaker Baroness Boothroyd was among parliamentarians who condemned the raid at a conference at Church House last week.

The township was built in the 1980s by dissidents to launch raids on Iran, with the support of Iraq’s late former  dictator Saddam Hussein.

Its existence is an embarrassment to Iraqi prime minister Nouri Maliki who is fostering closer relations with Iran. But he denies sanctioning the violence, in which men and woman were shot at close range, in the style of executions.

The camp’s main occupants, the People’s Mujahedin Organisation of Iran, is considered a terrorist group by Iran. America previously listed it as a terrorist organisation but removed it from the list last year.

Reuters: Iran is ready to hold talks with six...

Canada expresses concern over arrest of Bahai in Iran

AFP: Canada expressed concern over the apparent arrest of...