Text of letter by Iranian political prisoner to his daughter 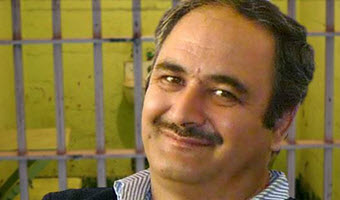 London, 15 Sep – Shahrokh Zamani, an Iranian political prisoner, was found dead in his prison cell on Sunday with his mouth full of blood and a bruised head. A 51-year-old labour activist and painter, Mr. Zamani was arrested in June 2011 and was being held in Gohardasht (Rajai Shahr) prison in Karaj, north-west of the Iranian capital Tehran. The following text is an English translation of a letter by Mr. Zamani which he wrote exactly one year ago today to his daughter from prison (published by the National Council of Resistance of Iran)

How can I be indifferent to the fate of my cellmates and just think of you and me when I am in a country where a handful of bloodsucking parasites exploit millions of human beings and overtly steal and plunder thousands of billions of the public wealth in one of the richest countries in the world ranked tenth in minerals and turn this country into a place where 80% of the people live under the poverty line with one of the highest prices for goods with millions unemployed, millions of street children, inflation, prostitution, unemployment, homelessness, divorce, addiction and gloom?

How can I be indifferent to the fate of hundreds of thousands of street children or working children and tens of thousands of hungry and homeless girls living where we have extremely rich parasites with their several billion rial cars?

How can I be indifferent to illiteracy of two future generations of 11 million poor while seeing scholarships worth billions related to the hardliners?

Can one sit and look at how 600 from the state mafia devour a quarter of the country’s wealth or 150,000 billion bank loans while 1.2 million youths are lining up for just 5 million Rial loans?

How can one ignore the arrest, torture and execution of thousands of freedom-lovers who are struggling for equality and defense of civil and legitimate rights?

Yes, my dear daughter. A real human being cannot turn a blind eye to all this prejudice, inequality and injustice.

Don’t you worry! We have dear ones here that, set aside attending weddings, are not even permitted to attend burial ceremonies of their parents or children so that the rich and powerful can demonstrate their servitude to capitalism.

You should be 100% sure and know that history will throw the tyrants in history’s dustbin. Hear from your father that in such a society with many classes, humanity is slaughtered and the idols of riches and deceptions inject the society with selfishness and consumption to reduce mankind to animals. Only those who swim against the flow of the river can keep themselves from this sludge and keep their human identity. As the French revolutionaries said: one for all and all for one. Those who study the progressive revolutionary literature against tyranny and exploitation and constantly combat selfish animalistic mindsets; and those who help and love their fellow human beings as they struggle; only and only with such a mindset, true love of your spouse and children will come and will persist. Otherwise, mankind becomes an idol worshipper who is captivated by money and power and social status and thus is captivated by his or her selfishness and becomes a foreigner to his human identity. Then how can one love his or her fellow human being and sacrifice for them, including your spouse and children?

From the one who loves you and all mankind.

Saudi, UAE ready to press China on Iran sanctions: US

AFP: Saudi Arabia and the United Arab Emirates have...

Human Events - by Oliver North: Now that the...