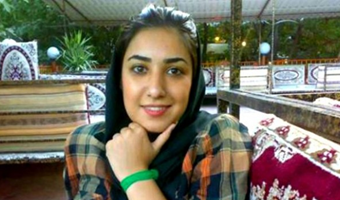 “The trial of satirical cartoonist Atena Farghadani and her lawyer on a charge of ‘illegitimate sexual relations falling short of adultery’ after they shook hands is not only absurd and extreme but clearly politically motivated”, said Amnesty International ahead of her court session starting on Saturday in Tehran.

“It is clearly both absurd and a violation of the right to privacy to consider a man and a woman shaking hands as a criminal offence”, said Raha Bahreini, an Amnesty International researcher.

“These charges are politically motivated and they are a blatant attempt by the Iranian authorities to harass Atena and hinder her lawyer’s work representing her. Instead of subjecting this young prisoner of conscience to further harassment and intimidation, the Iranian authorities must immediately drop these charges and free her immediately and unconditionally”, she said.

“Both Atena Farghadani, whom Amnesty International regards as a prisoner of conscience, and her lawyer Mohammad Moghimi may face up to 99 lashes if found guilty. The organization believes the cartoonist and activist has been detained solely for exercising her right to freedom of expression”, Amnesty International said.

The human rights group added that Atena Farghadani is going to Saturday’s hearing without having secured a lawyer of her own choice and fears that she will not receive a fair trial.

Atena Farghadani and Mohammad Moghimi were charged with “illegitimate sexual relations short of adultery” after they shook hands in prison after her trial on 13 June. Mohammad was arrested, and released three days later after he had paid a bail amounting to around $60,000, Amnesty said.

In June, Atena Farghdani was sentenced to 12 years and nine months in prison for multiple offences including insulting the Iranian regime’s lawmakers and its Supreme Leader Ali Khamenei after publishing a series of satirical cartoons depicting legislators as monkeys, cows and other animals.

Her conviction also stemmed from her speaking out publicly on the rights of the families of victims of the regime’s crackdown following the 2009 uprising in Iran.

“Whilst in prison, Atena Farghadani has been verbally abused with sexual slurs and other insults by both prison officials and guards. Despite a three-day hunger strike by Atena Farghadani in September, the harassment continues”, Amnesty said.