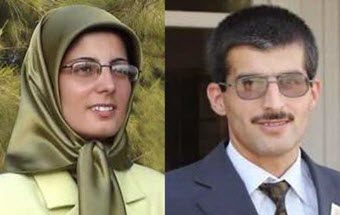 Tehran, 23 Apr – Two family members of members of the main Iranian opposition group People’s Mojahedin Organisation of Iran (PMOI or MEK) have been arrested for marking the fifth anniversary of the deaths of their relatives at Camp Ashraf in Iraq. Azam Madadzadeh, the sister of the two PMOI members killed, and her husband Karim Kohandel were arrested in a raid on their home at noon on 7 April.

Some 30 members of the security forces were involved in the raid that lasted until 11pm, according to local reports. The Madadzadeh’s family home was searched and items including photo albums and electronic devices were seized. Some guests were also arrested and their houses searched. The health of the mother of the killed PMOI members, Ms. Madadzadeh, aged 67, and Ms. Kobra Amirkhizi deteriorated during the distressing conditions.

Akbar and Mahdiyeh Madadzadeh were killed during a raid on Camp Ashraf on 8 April 2011. Footage shows Iraqi Army forces firing indiscriminately at crowds and charging with bulldozers and armoured vehicles. In total 34 people were killed and 318 injured. Then-US Senator John Kerry and the head of the main Iranian opposition coalition National Council of Resistance of Iran (NCRI) Maryam Rajavi called the attack a “massacre”.

Camp Ashraf housed members of the Iranian opposition group the PMOI (MEK) in Iraq. The Iraqi Army conducted the assault on the orders of then-Prime Minister Nouri Al-Maliki but with support from the Iranian government. Camp Ashraf had been targeted by Iraqi forces since 2009 when the US turned control of the camp over to the Maliki government. PMOI residents of Camp Ashraf were forcibly moved to Camp Liberty, near Baghdad, in 2012.

The UN Working Group on Arbitrary Detention in May 2012 categorised the PMOI residents in Camp Liberty as being in arbitrary detention and called on the Iraqi government to immediately release and allow their free movement. In the meantime the NCRI has been repeatedly calling on the US and the UN to act on the minimum security requirements needed at the camp- including a 24 hour Blue Helmet team of UN monitors, return of 17,500 T-walls, a sufficient number of 2x2m concrete bunkers, protective clothing and medical supplies.

The National Council of Resistance of Iran called on all human rights organisations, in particular  the UN High Commissioner for Human Rights, the Rapporteur for Arbitrary Detention and Ahmed Shaheed; the Special Rapporteur on the situation of human rights in Iran, to condemn the arrests of the dissidents’ relatives in Tehran.

Obama should have refused to meet al-Maliki

MSNBC: Maliki’s failure to be a true partner with...